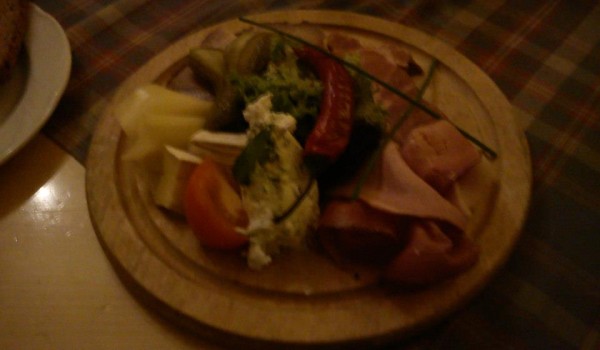 Their cook, too, put some noticeable effort into the Brettljause, even though based on the past visits (and some awful breads eaten two years before) my expectations were quite low. Brettljause is not part of the standard menu and was offered as the weekly special. On the variety side it was poor, containing only Schweinsbraten, Selchfleisch (or something looking very much like Selchfleisch), some Speck-like ham that was not Speck, very garlicky spread and cheese. Surprisingly, there were two types of cheese: a couple of tasteless slices and a couple of pieces of soft cheese, which unfortunately was almost tasteless as well. That’s really a shame, because the cheese plate I ate afterwards contained a couple of cheese sorts that had quite a strong taste and would have improved the Brettljause tremendously.

Another surprise was that the Selchfleisch and the Schweinsbraten were not served as slices but as thick pieces, significantly adding to the authenticity. On the other hand, they were not great quality-wise (the Selchfleisch at least), and I could not get rid of the thought that had those pieces been sliced, they would not have resulted in more than 3-4 slices anyway.

The other strange thing was the notable absence of horseradish and mustard. Instead the dish featured a really strong red pepper that must have been responsible for at least two of the four beers I drank. It was too strong, to tell the truth, but certainly contributed to the originality.

In conclusion, this Brettljause was a step in the right direction, though far from reaching the goal. It would have scored a bit lower, had it not been for the friendly service and the atmosphere of restaurant itself, which was rather cozy, as a tourist-oriented restaurant with a mid-week lack of tourists can be.