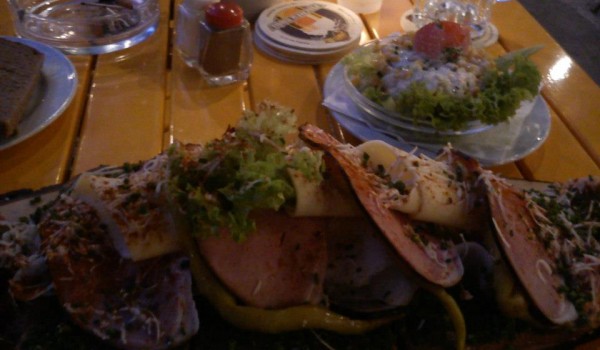 The menu of this brewery lists the Brettljause in the section “small dishes,” so I was a bit surprised to receive a piece of wood of substantial size, covered with a thick layer of stuff. The trick was revealed soon, though, when underneath four slices of ham and four slices of cheese I found a huge pile of radish and green onion-topped bread. The latter was even more surprising because extra bread was delivered on a separate place. Apart from the ham and cheese, the only other “serious” part of the Brettljause was some spicy spread, which went quite well with the bread and beer. The rest was basically decorations: some horseradish, some paprika powder, some cucumbers, three Pfefferonis (when will people finally understand that Pfefferonis do not belong on a Brettljause?), and so on. It looks good, it does not taste bad (the salad dressing is very good, by the way), it’s even strangely filling, but one can’t help feeling a bit cheated, because at the end of the day, it’s not really a Brettljause.