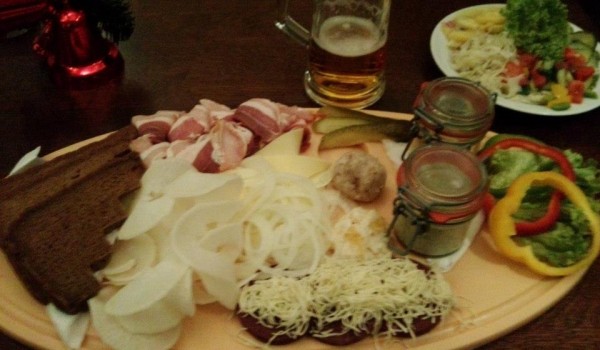 At a first glance, it was an impressive Brettljause. Three slices of bread, heavy-looking rolled Speck slices, quite a lot of cheese, big balls of Schmalz and Verhackertes, three slices of blood sausage, two closed glasses with Liptauer and green pumpkin spreads – all this decorated with fresh paprika, pickled cucumber, onions, salad, radish and horseradish. And everything – absolutely everything – turned out to be a complete disaster.

To put it in one word, it was tasteless: not in the sense of being of a bad taste, but of having no taste at all. The Schmalz was the only exception; having no Grammel in it, it was pure warm fat and tasted of pure disgusting pig. The Verhackertes was a gray cold lifeless paste; the spreads very industrial and too liquid. The bread was insufficient for the spreads, forcing me to eat too much at once and anyway having no ability or desire to finish. The cheese was of the plainest sort, with slices glued together and blocking the throat. The blood sausage simply had no taste whatsoever, which was probably a blessing. The Speck was the worst, though – extremely fat, warm and undercooked, it was unchewable. After half a minute of turning the disgusting fat mess in my mouth, I had either to spit it out or to swallow it whole, which I did with the help of the totally uninspiring beer. The onions, radish and horseradish were all as bland as the wood they were served on, and even the mixed salad contained some of the most flavorless cucumbers, potatoes and cabbage I have ever tasted.

The Ambulanz has a nice location, and the service is OK (especially with the Christmas Bazaar outside), but this travesty of a Brettljause has no right to exist. It can probably be worse, but one would need to work really hard to achieve that. Avoid!