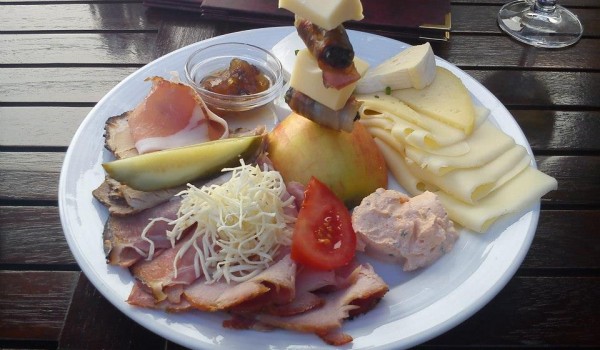 To be fair, it was not a Brettljause. A real Brettljause was also available on the menu, but the “Mostbaron Teller” promised more cheese and no Blunzen, which sounded as a good deal (by the way, the Brettljausen that other customers were eating looked very good).

My plate (and it was a plate, not a piece of wood) featured a strange architectural structure with half an apple at its bottom and a few pieces of cheese and bacon on a skewer. The bacon was wrapped around something indeterminate, which very well might be a fruit, but tasted great at any rate. Unfortunately, mustard was nowhere to be seen, and the horseradish did not have any “kick,” but there was Liptauer, some tasteless goat cheese and a spicy (and very good) pear jam, which in combination provided enough stuff to spread over the bread.

The meats – Speck, Schweinsbraten, Geselchtes and something else – were excellent, clearly coming, as advertised, from the local producers. They had a much dryer and saltier taste than in other places and went extremely well with the local speciality, the Most (Mostbaron being 1000 times better than the Amstettner Mostbirne, but they have at least 10 other sorts to try). The cheeses were somewhat disappointing, with only one type having some taste. At least there were enough sorts to keep the interest running. Finally, there was an obligatory salty cucumber, which was a strange thing to eat together with an apple.

Distelberger is not an easy place to reach without a car, but it’s definitely worth the effort. It was selected as one of the best Heurigers in Lower Austria, and one can easily see why.