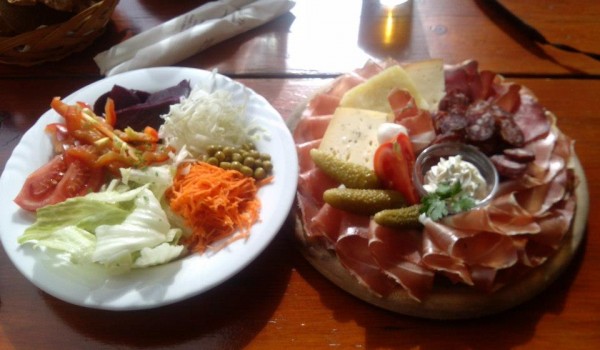 I have nothing against Speck. I like Speck, and I like the South Tyrolean Speck especially. If there were some kind of a petition requiring each and every Brettljause to feature Speck, I would be the second the sign it. The second, because the owners of the Troier Hütte would definitely beat me at this. Damn, they would probably author the petition.

Their Brettljause, as you can guess, is a bit on a Specky side. It’s actually quite overspecked. Fortunately, the Speck is cut in very thin slices, so the initial horror of not being able to finish it was not confirmed (I am generally in favor of thickly cut Speck, but here the thin slices were a blessing – and actually this Speck does taste better this way). Unfortunately, there was not much more on the plate to balance the Speck. In the best (worst?) South Tyrolean Marende tradition, this Jause consisted only of Speck, Kaminwurzen (cut in round slices and not many of them) and cheese. The cheese came in three types, which did contribute to the variety a bit, and there was also a tiny ball of mozzarella, which is hard to call cheese anyway. Otherwise, the heavy-looking dish contained only some herb butter (no horseradish, strangely), pickled cucumbers and a tiny tomato slice.

The weird thing, it still managed to be good, even at a rather steep price of €12. The quality of the Speck was one of the two reasons, of course – it really was quite outstanding. The second reason was that the location and the atmosphere of the hut was unmatchable. It’s situated on the plateau of the Seceda skiing mountain, just about 30 minutes’ walk from the top station of the cable car. It’s extremely well taken care of – the cleanliness of their toilets alone can beat many hotels and even more homes, the service is very friendly, and the view is breathtaking. If you don’t try this Brettljause, you won’t die, but you’ll miss something rather special.