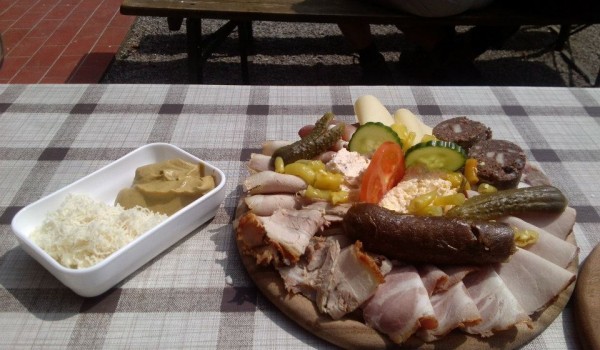 They don’t tell you that this is a Brettljause for two persons; they won’t even charge you double (and at 6 Euros this is one of the cheapest Jausen around), but be warned that to eat this alone is a challenge. It even comes on two pieces of wood: one with the food and an empty one to be eaten from. You also get a basket with two giant slices of surprisingly fresh bread and a separate bowl with mustard and horseradish. For once there is no need to save on either of them to make sure there is enough for your final piece of sausage. Why hasn’t anyone thought of this before?

Meat-wise, the choice is very impressive. The highlight is a half of a grey sausage, the likes of which I have never seen anywhere else. It’s not super tasty, but with a sufficient amount of the eye-watering horseradish, mustard and bread it goes down quite well, especially when helped by the better-than-average Most. The best stuff is the two types of Schweinsbraten, one with a wonderful salty crust (and some not-very-wonderful cartilage), which they would probably call Stelze rather than Schweinsbraten. The Speck is very salty and chewy, but absolutely non-industrial. On the other side of the spectrum there is blood sausage and a pork jelly, the latter being better than the former, but at the end these are the two ingredients I generally like least (and thus eat first). Two slices of cheese, fully aware of their tastelessness, served more as a decoration rather than a necessity. But that’s not all: the plate contained at least two other types of meat, a standard Heuriger’s Liptauer spread and a brilliant little spread made out of eggs and onions.

There are tastier Brettljausen around (although very seldom so close to Vienna), but variety- and price-wise this one is unbeatable. Add to this a very nice location – the cliffs of Peilstein are nearby – friendly service and the closeness of Karner’s other establishment (a very popular Mostheuriger with an impressive menu), and this little Schützhaus can only come out as a highly recommended destination.