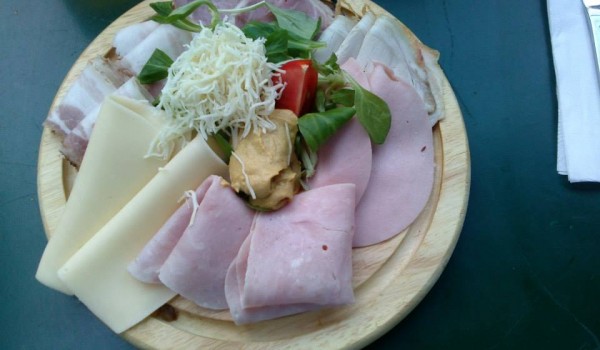 Follow the poor textbook. Go to a supermarket. Buy Speck, cold Schweinsbraten, Geselchtes, Extrawurst, some ham and the most tasteless cheese you can find. Cut three slices of each, except for the cheese, where two slices will suffice. Was the ham the most expensive of all? Make it two slices, too. Add some mustard, horseradish and a small slice of a tomato. Not original enough? Buy some Vogerlsalat and add it as well. Serve with two small slices of bread and charge 7+ Euro.

Rob’s Bierheuriger replaces the Heuriger “Zum Löwen von Aspern,” which had a rather bad Brettljause of its own, but a very nice garden and other food of occasionally good quality. In the case of Rob’s Bierheuriger, only the garden is still there.