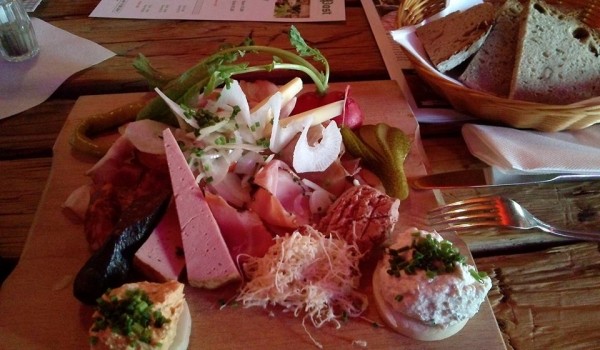 Rosi Schipflinger is apparently some known personality in the town of Kitzbühel, the skiing location of rich and famous. On the site of her Sonnbergsstuben there are plenty of Schwarzeneggers, Beckers and Co, and currently she is on tour in Vienna for the Wiesn Fest (Austrian answer to Oktoberfest), in a specially erected hut called Rosi’s Alm.

The hut is actually very impressive for a building that is not expected to last for more than a few days. Everything looks very solidly built, and the attention to detail – like the curtains on the windows and sheep hides on the benches – is quite extraordinary. It is very well staffed too, with numerous women in Lederhosen moving around, distinct from some of the more “traditional” guests only by the fat purses hanging on their belts.

All this must cost a lot of money, and the cost has certainly crawled into the menu. A small beer for 4.20 Euros at such a place is, frankly, a joke, the cheapest wine is at about 10 Euros a quarter (and not especially good wine either), and the Brettljause (sorry, Tiroler Jauserbrettl) costs 13.50. I am generally not too price-conscious, but still I have expected the Brettljause to deliver something different at that price.

And actually it did, in the form of plentiful fresh radish, a Blutwurst featured as a part of a long sausage rather than thick round slices, and a couple of slices of a cold Leberkäse. Radish aside, the other two novelties could actually improve the Brettljause by being absent. I also quite disliked the liver pâté, which tasted more of liver than I generally find bearable. The other ingredients, however, were quite nice if rather standard: small slices of different types of Speck, ham, salty Hauswurst, some cheese (with no strong taste but with some taste at least) and two spreads, served on slices of radish. The best parts were the horseradish – freshly cut and quite strong – and the bread, very fresh and served in large quantities.

Somewhere in the Tyrolean Alps, depending on the weather and the surrounding landscape, such a Brettljause would have been acceptable if slightly disappointing by its averageness and tiny deficiencies like the absence of mustard. In Rosi’s Alm, unfortunately, other forces were at play. Right after my arrival the hut started to fill up with noisy and over-excited people in national dresses. It took just a few minutes until all the tables were occupied, and I began to become really worried that soon someone would decide to share my table. Then some idiot has turned on the music (there was also a stage at one end of the hut, but I suppose it was only used in the evenings) – some semi-traditional pop crap, which made reading a book totally impossible. The movement of people increased even more, with someone constantly walking a few centimeters in front of my table, greeting someone else, chatting with the waitresses, etc. It was like accidentally ending up at a stranger’s party where you don’t know anyone and no one knows you. There are only two escapes from such a situation: to get completely drunk to or leave. I have chosen the latter, finishing my Jause in the shortest time possible and deciding not to order any more drinks.

After all the noise, getting out of the hut was quite a relief, and the further I got away from the Wiesn Fest, the better I felt. It can very well be that the atmosphere at Rosi’s Alm has been quite similar to what takes places in Kitzbühel during the celebrities’ parties. I can even imagine that the food is the same – at least the menu of Sonnbergsstuben contains the same Tiroler Jauserbrettl for exactly the same price. But honestly, if these celebrities go to Rosi’s thinking they are getting a really good Brettljause, they must truly be as stupid as they appear.