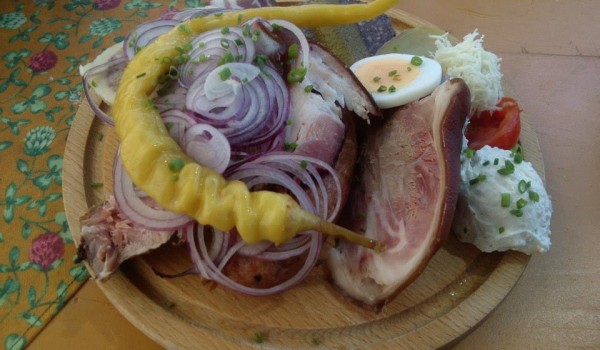 Zeilinger is another “Mostbaron”-certified Heuriger that I always postponed vising because of its less-than-convenient location. And indeed, without a car a 10 km walk in one direction is strenuous. It’s also less fancy than some of the other Mostbarons, and if I did not know in advance, I would have taken it for a simple “locals only” establishment.

The Bauernjause I got was one of quite a few options in the menu, which included a “normal” Brettljause, some Speck and cheese mix, etc. As customary with Bauernjausen, the meat was thickly cut, with “thickly” in this case meaning a really impressive chunk. The wooden plate could hardly accommodate a grayish sausage, a lump of Geselchtes, a hunk of cold Stelze, a long piece of Speck, an enormous potato/meat dumpling, slices of blood and liver sausage and a white herb spread. According to the menu, everything was produced locally (apart from the horseradish and the Pfefferoni, I guess), and one can easily believe that. Quantity-wise this Jause is enough for two hungry people, and at less than 6 Euro it’s almost suspiciously cheap.

The problem is, it’s so authentic it’s barbarian. You may like pork, and look forward to eating pork in its various varieties, but this particular Bauernjause will test your devotion to pork to the extreme. It’s going to be a fight between you and the dead pig, and the pig may win, as it did in my case (though by only one-fourth of the sausage that I could not finish). The struggle would have been easier if the different meats had stronger and distinct tastes, but unfortunately the taste of most of the stuff was quite bland. The strongest taste came from the liver sausage (which I thoroughly hated) and the spread (which was almost the highlight). The horseradish, the Pfefferoni and the cucumbers were all buried under the meat and had to be rationed as they provided most of the flavor apart from the pure pig.

It’s seldom that I say that, but less would have been better. Add some spices to the meat (start with salt), introduce some strong cheese, cut the skin from the Stelze (it’s the brown leathery type, which is impossible to chew and absolutely disgusting if it ends up in your mouth), and increase the share of the vegetables – and this will be one of the best Jausen in Mostviertel. As it is now, it’s a hymn to a dead pig.

The Most was good, by the way, and very cold – exactly what was needed on such a hot day after a long hike.