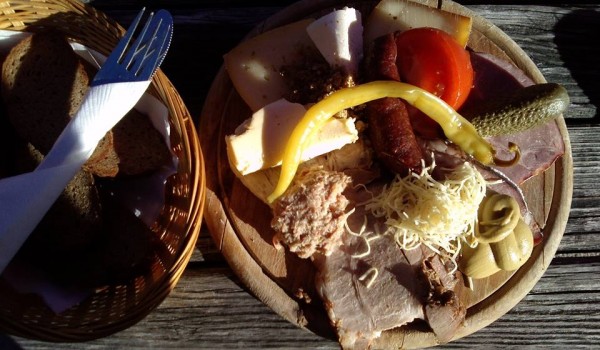 A year ago, I made the mistake of trying the Walcheralm’s Brettljause two hours after eating another one and, of course, could not finish it. This year I made the mistake of finishing the Walcheralm’s Brettljause before having a four-course dinner at the hotel. The poor hotel’s cook must have wondered what he had done wrong, though it was not at all his fault – it’s just that whoever is planning to try the 10-Euro Brettljause at Walcheralm should make sure that he is not going to eat again on the same day (digestive Schnapps aside). “Urig” – says the sign to the Alm. “Very big,” they should have added.

The meat portion of this Brettljause alone would have been fully satisfactory: thick slices of Speck, ham, Schweinsbraten, together with a long Hauswurst and a Verhackertes spread, fortified with mustard and horseradish. However, this being a cheese-making place – their cheeses are all on offer to take home – their Brettljause also contained five (!) types of cheese, all home-made and generally fantastic, especially with butter being provided in abundance. All the cheeses were tasty apart from the goat one (and that had to be expected), the highlights being the gray powdery cheese and the strong cheese smelling and tasting distinctly of a cow’s ass (with the smoked cheese being not too far behind).

The end result is a Brettljause which is challenging to finish but which is so unique in its two-part nature that it puts itself apart from any competition. If you visit Ramsau am Dachstein (or any nearby place), going to the Walcheralm is a must. Even though you will be thinking of cows’ asses for quite a while afterwards. 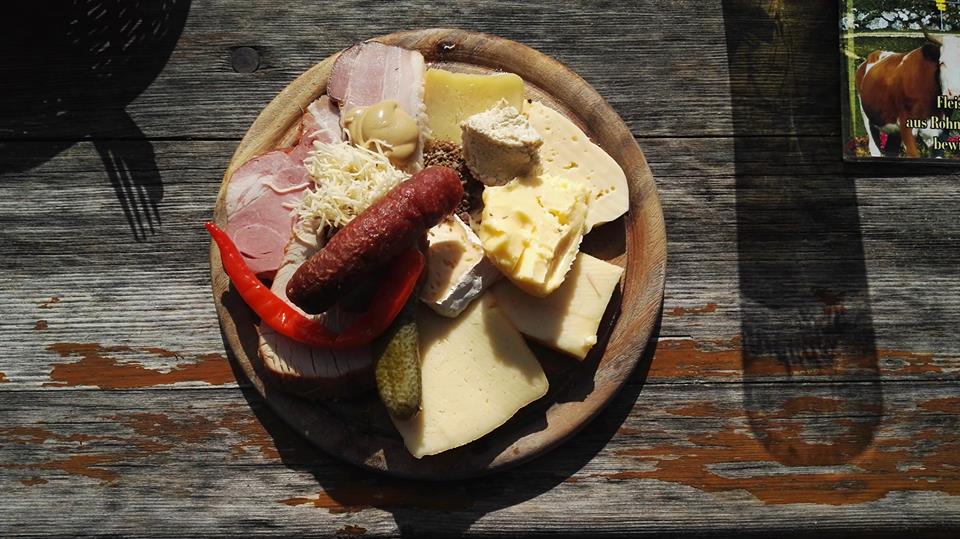 Update from 15 October 2016: It’s still good. Very good. Even a two year-old boy at the table next to mine was biting into the Hauswurst and saying “This is tasty!” It’s also very big. So big, that having finished it, I had to lie down on a bench nearby and sleep for an hour.

The Verhackertes is gone, unfortunately, and the Speck and the Geselchtes were a bit too fat, but maybe I’m simply aging. The cheeses continue to be fantastic though, and I can only repeat what I said before: if you are in Ramsau, don’t be an idiot and go to Walcheralm.

Nevertheless, today I am still going to be an asshole and take one point off for the fat Speck. 8/10.

Update from 20 October 2018: Still good, but the worrying tendencies continue. The meat part is shrinking and is getting cut thinly. The cheeses are as good as ever, however, so my verdict still holds: it’s the best Brettljause in Ramsau, a strong 8 out of 10. On the other hand, unless there is a turn for the better, the next time I visit Walcheralm, I might have to re-evaluate the earlier score.