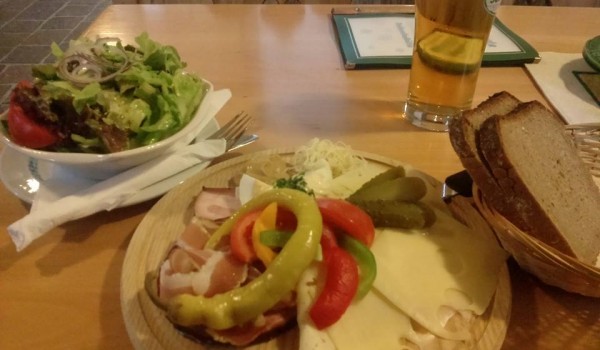 Today was the last day of the Reiteralm cable car’s summer operation. It was also the last day of operation for the bus going to the Reiteralm cable car, so the driver had to get out at every stop in order to remove the obsolete schedule. This did not seem to bother him much and certainly did not bother anyone else, with me being the only passenger. And the reason I was travelling alone was because it was raining really hard.

All this considered, the serving staff at the Reiteralmhütte could easily be forgiven for looking a bit as if they were going into winter sleep (which is not true, of course – at best they would be able to afford a short break before the really busy winter season starts). They were not slow, even efficient – just not too inspired. And perhaps because of the bad weather the entire ambience of the hut was slightly on the “we’re closing” side.

That did not prevent the Brettljause from being good though, especially combined with the above-average mixed salad. It was a competent, if a bit supermarket-y mix of thickly (and generously) cut Bauchspeck, Wiener and some ham, and thin slices of some other Speck and two not too different types of cheese. It also had mustard, horseradish (not bad), cucumbers, paprika, Pfefferoni and – the highlight – half of an egg with mayonnaise. The mayo tasted strange in combination with the mustard, but at least this was something different. At the same time I cannot say I enjoyed the dark bread, which had too much of a bitter taste to go well with the meats. And beware of their Most! It was easily one of the most disgusting I have ever tasted, reminiscent of light wine diluted with water straight out of a toilet. Still, the Brettljause was of solid average Styrian standards, and since these standards are higher than Austrian averages, my score is above average, too.