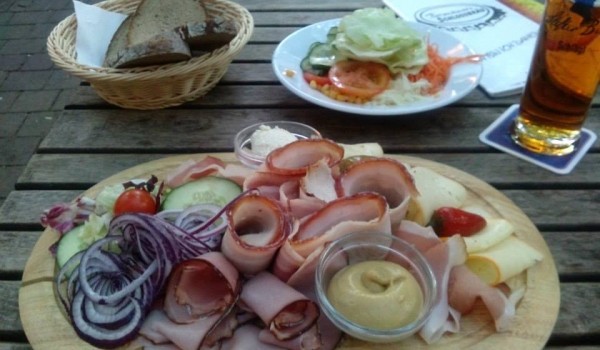 I was expecting this Brettljause to be the same as at Brandauer’s Bierbögen – after all, both places share the same owner and the menu. Strangely, it wasn’t, even if that means their menu lied.

For one thing, this Jause did not feature the Kaminwurzerl. As a compensation, one gets a few slices of smelly and tasty cheese – a Dachsteiner, I would say. Also, instead of the fresh horseradish, Schlossbräu serves a creamy and very strong one – when used instead of butter, it made my eyes water on several occasions, helped by a couple of equally fierce chilies.

The rest of the Brettljause was quite ordinary: rather thick slices of Schweinsbraten, two types of Speck and some ham – not particularly interesting, but very filling, especially when combined with a “small salad” that was not small at all. It was also very heavy on onions, which are fine while you are eating, but tend to remind you of themselves for hours later.

Being located close to the entrance to the Schönbrunn palace and the zoo, this Brettljause may satisfy a few tourists looking for an “Austrian experience.” They will be missing a lot, too, unfortunately.