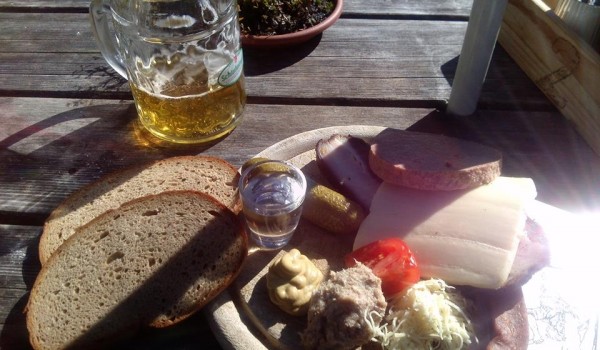 There are two huts on the picturesque Duisitzkar lake, and the second one (Fahrlechhütte) was a serious contender to the Austrian Brettljause-hut of the year 2012 title. Sadly, the appropriately (though unimaginatively) named Duisitzkarseehütte is not in the same league as far as Brettljausen are concerned. Partially it is the fault of whoever decided to initiate digging works all around the lake, turning the area around the hut into a swamp, and to strategically place an excavator to preempt any attempt at making a nice photo. On the other hand, the Brettljause itself also left a lot to be desired.

Being of the thickly-cut no-fork (well, one could still find one in the cup on the table) “urig” variety, it contained nothing apart from Speck, a round Wiener sausage, a long four-sided sausage I remember seeing in a Handl package (and the packages of other sausage manufacturers) in supermarkets, tasteless cheese and a Verhackertes spread. This was accompanied by horseradish (rather ignorable), industrial mustard and a shot of Schnapps to help with the digestion (which proved to be quite good actually). With the Verhackertes being rather unexceptional, the Speck remained the highlight of the experience, though its consumption required the removal of the unchewable skin and some pieces of cartilage (not a big deal). Its unusual taste made the Brettljause for me for a while, until I realized what it reminded me of: oil. Whether the Speck had been smoked over some oil-based fire, or it had remained for too long in the trunk of a car next to a gasoline canister – I will never know, but the aftertaste was unmistakable.

Strange as it may sound at this point, it was still an enjoyable Jause, but it was unfortunately not half as enjoyable as the location deserved.