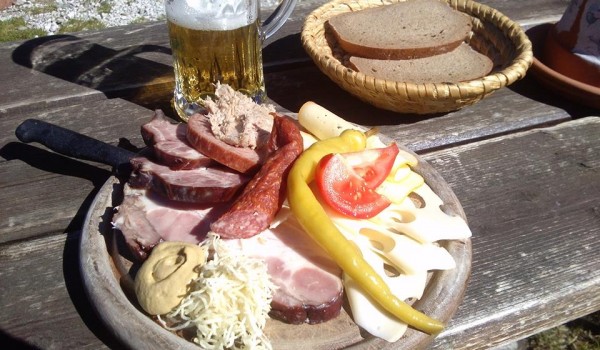 The Ursprungalm is the starting point of a hiking trail to the Giglachsee, on whose shore the Ignaz Mattis Hütte impressed me big time with its Brettljause a year ago. Although the Brettljause of Ursprungalm is hardly in the same category, it is nevertheless an almost perfect match to the authenticity of the little village (just a few wooden huts, some of which can be rented for holidays and some are just empty) located there.

Thickness of the cuts is written with a very big T here, though this does not apply to cheese (and to the Verhackertes spread, for obvious reasons). The meats include two slices of Geselchtes – which may or may not be the same; taste-wise surely not, – a long salty Hauswurst, a peppery Wiener sausage and a huge piece of something I would call Bauchspeck except that it did not have its normal smoky taste. It looked only one-third like meat, the other two thirds being very white, but upon close inspection a half of the white stuff turned out to be meat as well and a rather tender one, too. There were two types of cheese – that fact that alone earned this Brettljause an additional point – with one being the tasteless type with big holes, and the other (hallelujah!) a real Dachsteiner, like it’s sold in supermarkets in Vienna. With Dachstein being so close, this was a welcome encounter, regardless of where the cheese might have come from.

Decoration-wise there was not much to talk about, a Pfefferoni, some tomatoes, mustard and horseradish being the only things available. The bread turned out to be less fresh than optimal, and no digestion Schnapps shot was present, but still the Brettljause has managed to leave a good impression by matching the environment to the offer in a highly balanced fashion. And making me sound bloody philosophical about a few pieces of dead pig.