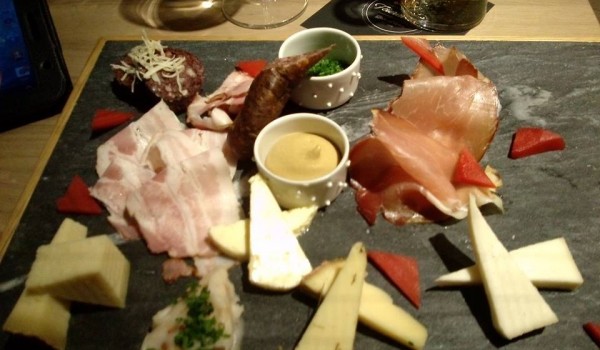 Ströck is a bakery and makes bread. It makes sandwiches as well, but the scarce slices of sausage and cheese they put inside can only mean one thing: Ströck wants us to enjoy its bread, while all the other details are unimportant. Frankly, this was my worry when I ordered the Brettljause at the newly opened Ströck Feierabend restaurant: am I going to get any meat and cheese at all or will I be faced with a pile of freshly baked bread?

Fortunately, I did not need to worry. The Brettljause did look quite empty in the beginning, but then I realized how big it was, taking almost the entire width of my not very wide table. The amount of food was not overwhelming – some meats were represented by two or three slices only – but the variety was impressive: Blutwurst, two types of Speck, ham, salty Hauswurst, Grammelschmalz and three (!) types of cheese, nether of them tasteless. All the ingredients tasted non-industrial, and according to the menu, they really came from some real Austrian farmers rather than a supermarker across the street.

The other bits were unusual. The horseradish was hardly present, with just a few scraps of it decorading the Blutwurst. Instead of horseradish, the Brettljause came with a tiny glass of schredded green onions, which frankly did not add anything. The mustard had a stronger, more vinegary taste than usual, which was a definite improvement over the standard out-of-the-can variety. There was butter, too, which I at first took for a sort of cheese and which all but melted by the time I tried it (the Schmalz has melted, too, which was really a pity; had it been colder and saltier, it would have been the highlight of the dish). Finally there were slices of something red all around the plate, which was obviously some unidentifiable pickle. Taste-wise it resembeled a mix of cucumbers and paprika.

At more than 12 Euros, this was by far not the cheapest Brettljause around, but at least one could explain the price by the location and the obvious effort that went into opening this restaurant. Unfortunately, the bright lights, the number of people and the noise they made created a rather stressy atmosphere, which became more bearable only after the first glass of wine. Still, considering the difficult Viennese market for Brettljause, one can only welcome this new opening. Especially when the bread is so good.