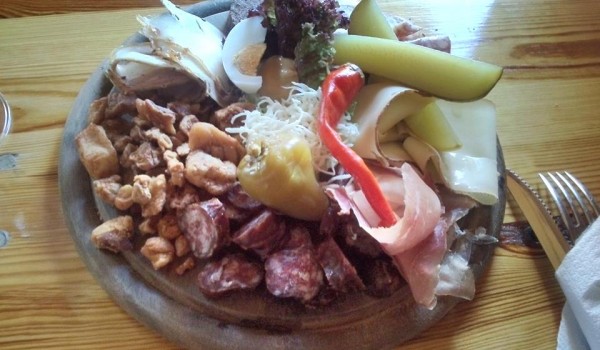 Weingut Walter is a cute little place in the tourist-free Strebersdorf, just a few meters up the Bisamberg hill. It is obviously well known among the locals, because all the places at the benches in the tiny but beautiful garden were taken, so I had to put up with a place inside the hut, with just one family on a neighboring bench and a flat TV playing the Russia vs. Belgium football match (which Russia lost). It took about 15 minutes for the waitress to arrive, and each time I asked her for something – to make the initial order, to bring another glass of wine or to pay – she looked slightly annoyed. It must have been stress.

With the place’s owner being originally from Tirol, I had had higher expectations of the Brettljause, and although the Jause certainly had a flavor of being different, it unfortunately managed to screw up just enough unwritten Rules of Brettljausen to fall below the average mark.

The main rule – a Brettljause has to be balanced, and in this respect, I was faced with a gross violation. There were five meats in the Jause – a salty sausage cut in tiny round pieces, Grammel (baked pork fat), blood sausage, Schweinsbraten, ham and some sausage with cheese bits inside (which I always thought of as an invention of an overly creative supermarket’s manager). There was also one type of cheese – a tasty, though supermarket-y sort of Bergkäse. Unfortunately, the salty sausage and the Grammel accounted for almost a half of the dish and thus completely dominated it. The Grammel especially is a rare and curious addition to a Brettljause but as its main component, it is tasteless, annoying, and even disgusting. The salty sausage was merely boring.

The other parts – the bland blood sausage aside – were quite pleasant if a bit uninspiring, but the fact that I had to ration them in order to taste some difference after forkfuls of Grammel was quite irritating. Then there was far too little horseradish and one-eighth of an egg looked like a joke when compared to a king-size salty cucumber. The paprikas were too big and too hot (such hot things are fine with beer, but with wine they are just bothersome), and the mustard was insufficient, industrial, and served on a salad leaf. The second unwritten rule of Brettljause clearly states that mustard must never be put on a salad leaf: this only results in difficult-to-extract mustard and a very mustardy salad leaf.

I really don’t want to create an impression that Weingut Walter is not a nice place to eat and drink at, but just think twice of ordering a Brettljause. A more homogeneous dish like a Speckbrot can possibly help avoid the dis-balance and thus be much more enjoyable.