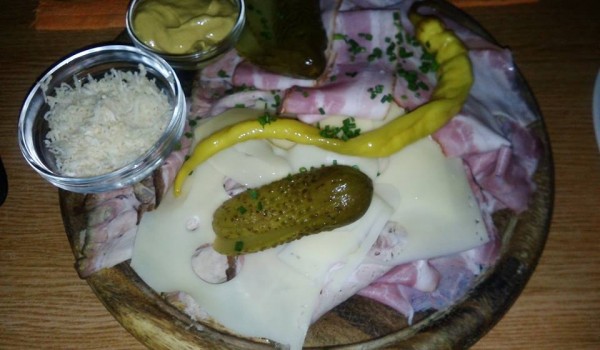 It is known that the minimum number of ingredients in a Brettljause is three. Most South Tyrolean Marendes fall in this minimatistic category, and so does the Brettlajuse of Gasthaus Hansi. Except that it is worse than an average Marende. Strangely, though, it is not as bad as it could easily have been.

The cheese is bland, no question – darkish yellow in color, straight out of plastic and looking quite sad. The Schweinsbraten, too, have a taste of rather old Schweinsbraten, which, in case of Schweinsbraten, is generally not a big deal. The third ingredient is Speck, which, while rather plain, is almost above expectations in its non-industrialness (having probably been cut from a big supermarket-bought piece) and is in sufficient quantity.

What was surprising, however, that in the other small details the Brettljause was quite uncompromising. There were two big salted cucumbers (very good ones, too), a Pfefferoni, plenty of mustard (too much even), a good amount of fiery horseradish and a complimentary Schnapps, whose price alone – for nearly 4cl – must have been close to the under-6 Euros the whole Brettljause cost me. Unfortunately, the lonely slice of bread was hardly enough and thus required careful portioning.

Despite all the shortcomings, at the end of the day Hansi’s Brettljause has managed to exceed the admittedly low expectations and even left the doors of that dark unexceptional Gasthaus open for a repeated visit one day.