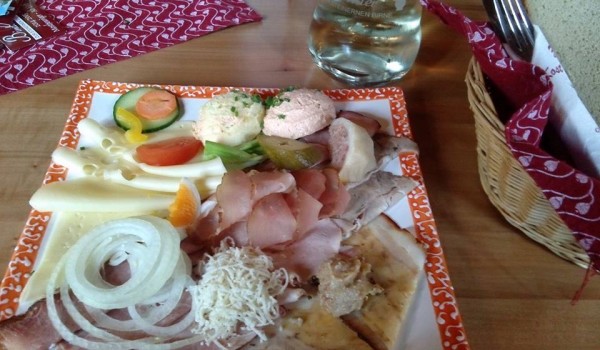 If there is one thing that makes this somewhat remote but always nice-to-visit Heuriger special is its variety of Jausen: I have already been returning twice to try various interesting offerings on their Jausen-menu, and I am quite sure I’ll be back rather soon.

The Vierkanterplatte (apparently named after some type of a square-shaped farm common in that region of Austria) is one of the cheaper dishes on the menu and is not really a Brettljause, as it does not come on a Brettl. What it probably is, is a sample of everything found on the other plates. In that, it is similar to Binder’s “flagship” Mostbaronjause (before they have come up with the new flagship – M3 Jause – which I still have to try), but is simpler and features just one or two slices of every type of meat and cheese.

Fortunately the variety is such that there is plenty to eat and everything has a special, pleasant taste (apart from the three sorts of cheese that have no taste at all). The meats are too numerous even to identify and impossible to list; the Specks are the highlight, matched by the Geselchtes and closely followed by the Schweinsbraten. There is also a slice of something resembling a Stelze with quite a lot of fat and stuffed with potatoes – a very strange combination, but not disgusting. Another weird ingredient is a potato spread, not tasty (as expected from a potato) but very un-industrial.

The Vierkanterplatte does not match the splendor of Binder’s “Urige Jause”, but is a solid offering on its own, especially if one feels adventurous but not especially hungry. And, needless to say, Zur Steinernen Birne remains one of the best, if not the best, Brettljause places in Lower Austria.