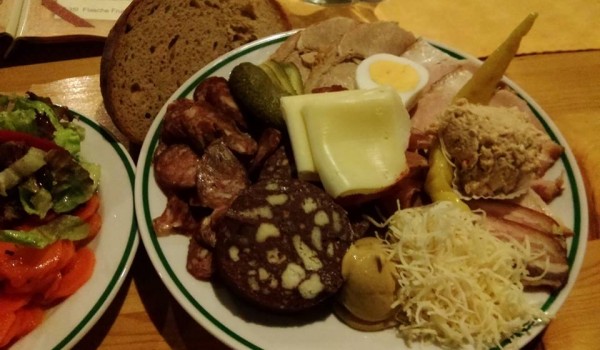 Waitresses taking orders by using an app on their iPods? Progress has certainly arrived in the little village of Zweiersdorf by the Hohe Wand, although one wonders if the paper-and-pencil approach is not more efficient after all.

The Brettljause is reassuringly traditional, fortunately. It is meat-heavy – a couple of cheese slices existing for decoration mostly – and quite authentic. It is easy to believe the menu, which says that all the ingredients come from the local farmers. The two huge slices of a blood sausage take the central stage and are not disturbing at all, particularly when combined with the very fresh bread, mustard and eye-watering horseradish. The spread is luckily not a Liptauer and has a rather pleasant taste of spiced meat and paprika. Also included are cold Schweinsbraten, salty ham and two types of Speck – all excellent, although one of the Specks could do without its unchewable skin. Finally, there is a once-long salty Salami-like sausage cut into many thin slices.

Overall, there is hardly anything to complain about this Bauernjause apart from the absence of a wooden board and the lack of cheese. Unfortunately, the drinks were not of the same standard: the Most was rather tasteless and slightly watery, uncomparable to the complex flavors of the stuff offered in Mostviertel. Obviously, the climate of the Hohe Wand is not that favorable to pear and apple trees. The Heuriger itself was a bit too crowded and noisy for my liking, but then that is probably a testament to the good food it serves.