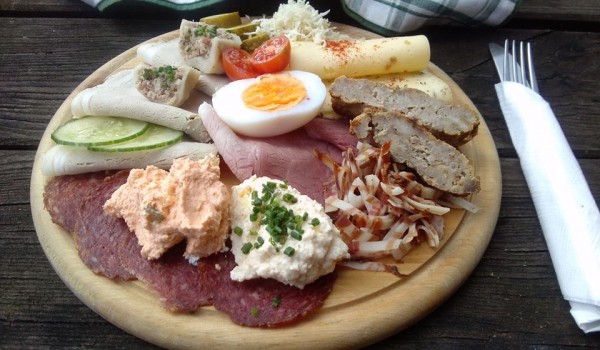 Klein Eibenberg is an unsophisticated place. Located in the hills between the towns of Ybbsitz and Gresten and surrounded by farms, it is not a Heuriger that a tourist or even a non-local is likely to visit. It also has a very basic menu: one type of Most, a Brettljause, some breads, Schnapps and that’s it. There is no grandeur of Mostbaron to be found here, and let’s face it, the Most of Eibenberg is not on par with the Mostbaron Heurigers’ expensive creations.

Its Brettljause is also not great, but simply good. The non-industrialness of the components is unquestionable (even for the simple reason that it would be much easier for the owners to get the ingredients from the nearby farmers than to drive to a supermarket) and actually some of them are quite unusual. The Speck, for example, is served shredded into tiny pieces for no particular reason; there are two slices of something they would probably call Bratl, which tastes like a mix between a cold pork steak and a cold burger. The salami resembles deer meat more than pork; the Schweinsbraten are light gray, almost white in color (which had no effect on the taste, though), while the cheese is actually tasty. Besides rather enjoyable Geselchtes and forgettable spreads there is also the typical Mostviertel’s meat dumpling in potato crust, though it is absolutely tiny.

Actually the entire Brettljause is not especially big, but at 4.5 Euro (without bread) there is nothing to complain about. The location is quite beautiful, the other visitors are not annoying, and there is a cat walking among the benches, waiting to be stroked. There may be no big reason to come to Ybbsitz specifically to visit Klein Eibenberg and to eat its Brettljause, but if one is in the area and slightly hungry, one can do a lot worse than to give it a try.