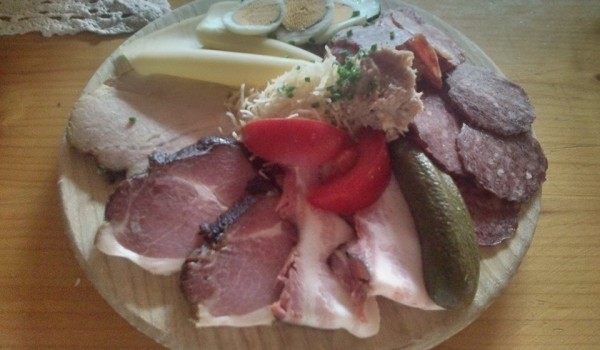 Here is another proof that to improve the quality of Brettljause experience one just needs to move out of Lower Austria and into Styria. One hour walk from the nice (but slightly over-touristy) Grünersee, this little hut offers a rather average, by Styrian means, Brettljause, which is nevertheless at least 20% better than the same thing served closer to Vienna.

It is the small things that make all the difference: the meats are cut 3-4 times thicker; the Schweinsbraten taste fresh and have a crunchy crust; the salamis are unexceptional but there are two types of them; the Schmalz has meaty, rather than fatty taste; and the horseradish makes you cry, so strong it is. There is no Grammel, no liver or blood sausage that would require early consumption in order to leave the best for later; everything is simple but well balanced and welcome.

The cheese still had no taste, and the Speck did contain two tiny bits of cartilage, just to complain a bit. Also, do not expect any kind of panorama from Jassing Almhütt’n – the word “Alm” in the name is slightly confusing. While it is true that the hut is located higher than some other things (like the lake and the closest village of Tragöß), it is surrounded by much higher mountains, so appears to be situated in a valley rather than on a pasture.