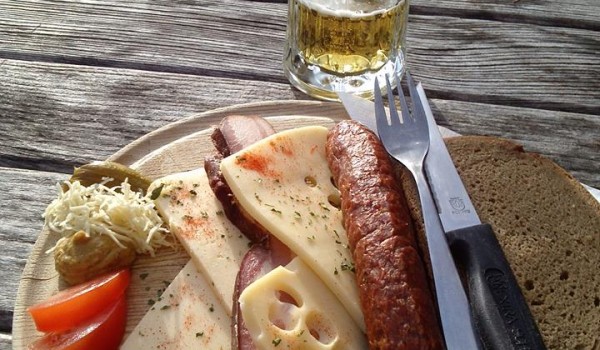 Another year, another visit to the Brettljause-paradise Ramsau am Dachstein, and another small “filling the holes” step in the quest of trying every single Brettljause in the area – a quest that I may not be able to complete in my lifetime.

Brandalm has been one of the most obvious omissions. Located on the famous “5-huts path,” it is a natural place to stop for a Jause, unless you have already eaten one in one of the other four huts, that is.

You know you are approaching Brandalm long before you see the picturesque and charming hut – by hearing the typical Styrian music. Today, like at the other occasions when I passed by Brandalm, there was a band half playing, half drinking beer, sometimes managing to perform both activities simultaneously. The waiters – calling them farmers would be more appropriate somehow – were friendly to the point of being invasive, but never really crossing the comfort line (maybe because there was a large group of Austrians they could chat, eat and drink Schnapps with). After a while the music stopped for a few minutes, but then four or five young guys came out of the hut carrying something that looked like whips and started waving them around, producing loud “clicking” sounds to accompany a harmonica, while standing on the benches the guests had been sitting on minutes ago. All that looked quite bizarre, but strangely genuine; I could easily believe they would have delivered the same performance even if there had been no one to observe them.

Coming back to the important stuff, the Almjause, it was quite minimalist, in terms of variety rather than quantity, It has only four ingredients: a full-length salty Hauswurst – a very edible one, being neither too dry, not under-cooked, – a long thick piece of Speck – good but not extraordinary, – and two types of cheese, which tasted like one type and not a very tasty type either. All that was accompanied by two slices of bread, a couple of tomato slices, the tiniest picked cucumber I have seen since long, an insufficient amount of horseradish and an equally small amount of sweet mustard, which was incidentally very good (even if it had come from a tube). The resulting experience was positively urig but somewhat underwhelming. The same dish served in a tiny hut standing lonely in the much higher mountains would have made a much better impression than this creation, produced at a place easily reachable by car (at least by the owners). In short: good, enjoyable, beautiful surroundings, but overall not as great as it could have been.