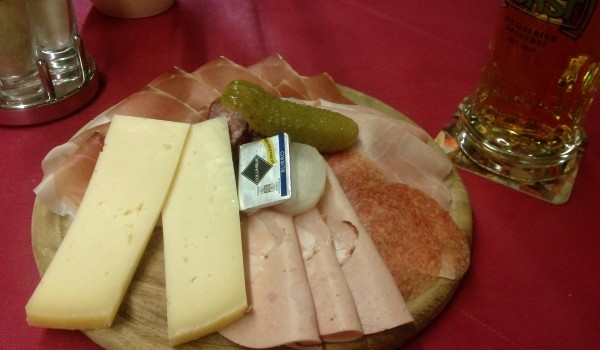 It’s probably too early to judge after staying in Meran for less than half a day, but I have a strong suspicion that the local beer brand Forst not only dominates the beer offerings at Meran’s restaurants, but owns quite a few of these restaurants as well, the Schwarze Katz included (update: yes, my suspicion was correct; see the website for a confirmation). Not that this is necessarily a bad thing: their beers are vastly superior to most common Austrian, and the Katz’s Marende is surprisingly good, too.

As I remember from my first visit to South Tyrol two years ago, a Marende is supposed to consist of three ingredients: Speck, Kaminwurzen and Bergkäse. In this respect, Katz’s offering is an “improved” Marende, because it also contains three other types of meat: two types of ham and a light salami, whose small pieces of fat make it look like a Wiener sausage but slightly paler.

The Speck is definitely the king of this Brettl, being just salty enough and having just the right balance of juiciness and dryness. It is easily chewable and never gets stuck between your teeth – a really perfect product. The Kaminwurzen are amazing, too: again, not too dry to be hard to chew and with a strong taste that has nothing to do with any animal. Going down the enjoyment scale, one type of ham is good enough to be served at the best Feinkost shops in Vienna and keep the customers reasonably happy. The salami, despite being featured as three very thin slices only, leaves a very good impression of something slightly spicy and definitely non-industrial. The second ham is much stranger: is is so pale in color, it resembles Extrawurst, but has a “meatier” taste that does remind one of pig. The cheese, being available in two thick slices, unfortunately disappoints; it does not have enough flavor to make it memorable.

“Decoration-wise,” there is not much: the pickled cucumber is good, but quite small, and the fresh radish gets eaten quickly without making much of an impact. The initial impression is also seriously marred by the presence of an industrial butter in an aluminum wrap, like served on plane flights. Not only this half-frozen piece of butter looks pathetic, it is also totally inadequate for spreading over the bread slices, which come in both dark and white flavors and are pleasantly fresh.

At the end, I am in two minds about this Brettljause/Marende. It is much better that it should have been. It is not as good as it could have been. Understand this as you wish. I guess I need more experience with South Tyrolean cuisine.