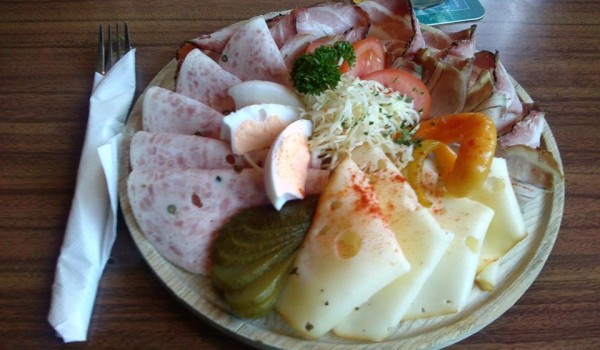 Having failed at finding a Brettljause in the town of Gröbming (shame on you, Gröbminger Alm’s website for misleading me on your opening days and the Brettljause’s availability!), I ended up surfing Schladming for a morsel of my favorite dish. As it turned out, while getting a pizza or a kebab in Schladming would have been a no-brainer, finding something as typically Steirisch as a Brettljause was quite a challenge. Although it might still be served in some remote huts on the Planai (still, very questionable in mid-October), coming across it in the town center required some creativity. Which landed me at Wanke’s – a place I would have never visited under different circumstances.

It’s a butchery shop, you see. No, not the one where you are faced with pigs’ carcasses and fancy products like “dried calf’s heart” – no, a completely normal cheese-and-sausage counter that wouldn’t have looked out of place in a Billa or a Spar. The difference here being that the second half of the shop has been turned into a miniature restaurant with about six tables, a bar and a no-nonsense owner/waiter, who looks as if he has spent a major part of his life chopping meat.

It does not look nice. Not at all. It’s also locals-only, tourists obviously not impressed by the place’s outside image (fully understandably). Their Brettljause is not too good either, and that’s the disappointing bit, because I have expected so much more from a butcher. Come on, you have got at least 50 varieties of meat on your counter. Why should I be content with only three plus some boring cheese? The Speck is good, I admit, but the Schweinsbraten are nothing special, and the Extrawurst with black peppers inside tastes like, well, Extrawurst with black peppers inside. Actually, the most prominent part of the Brettljause was the horseradish, fiery enough to make me wrap it in meat slices and order an extra small beer to gulp it down.

The horseradish and the oh-so-welcome egg aside, this was a surprisingly unexciting Brettljause, in a way dispelling any dreams about a “grey horse” place potentially being good. Average, at most.