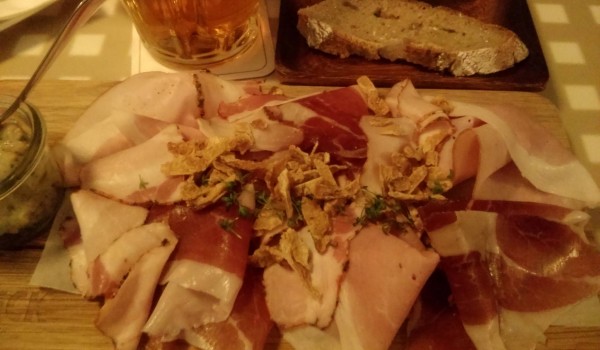 Lugeck is the newest restaurant of the Schnitzel-king Figlmüller, and thanks to its central location, is very tourist-oriented, as evidenced by a rather short and uninspiring menu and somewhat overzealous waiters. Unlike the other restaurants of the same owner, this one has a Brettljause, confusingly called “Jause am Brett,” just to make it sound different, I suppose.

And different it is, to be fair. It’s totally cheeseless, featuring three or four types of ham, mixed in such a way that makes counting impossible. All the hams are of a quality sort, and it’s a pity that there were not more of them, especially considering the hefty price of almost 13 Euro. Perhaps most of that money went towards the goose Grammelschmalz, served separately in a glass, which is quite fantastic: fat, salty, crunchy (when you bite on a Grammel) and not smelling of goose at all. This Schmalz alone, with bread, onions and black pepper would have made an enjoyable dish.

Altogether, however, Lugeck’s Brettljause is overpriced and underwhelming. No accompanying vegetables (some Grammel that the ham was covered with does not count as vegetable), no horseradish or mustard and only two slices of bread (though good bread) do not justify the name “Brettljause.” It’s exactly what they call it: a snack on a wooden plate.