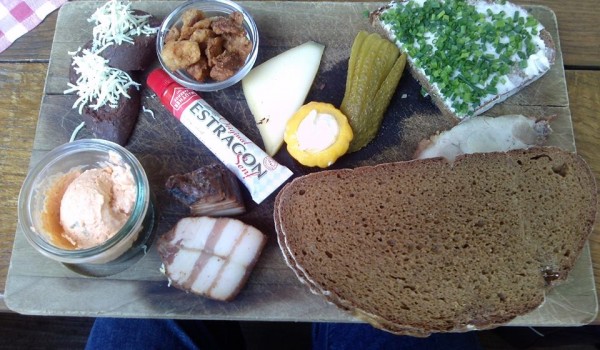 Zum Martin Sepp at 16:00 on Tuesdays is quite different from its usual image of noisy musicians, occasionally over-enthusiastic waiters, and singing crowds consisting 80% of tourists and 20% of big Austrian families celebrating wedding anniversaries of their grandparents. Today the benches in the courtyard were almost all empty, the musicians nowhere to be seen, the waitress rather unfriendly (or perhaps simply new and shy), and one could actually talk normally without having to shout in order to be heard. One could also watch a skinny pig at the first stages of being spit roasted.

It must be said that pigs generally look much more appetizing at later stages of roasting. It also did not help that the way the pig was attached to the spit resembled medieval tortures more than modern cooking techniques. Its ears were chopped off, and the belly was opened and then coarsely stitched closed; in addition to having been pierced by the spit, the poor animal was also secured on it with a sophisticated system of metal plates and screws. One can only hope that the pig had been dead long before all those horrible acts were performed on it.

Luckily, Martin Sepp’s Brettljause (bearing a tourist-friendly name “Heuriger’s Starter Plate”) was a much more normal, if a bit boring sight. Faced with a sizable board and a small number of ingredients, the cook must have had a hard time arranging the latter on the former to make the dish look appealing. At the end, he did not quite manage. Thickly-cut and heavily smoked Bauernspeck was easily the best part, closely followed by a thick slice of Schweinsbraten. The slice of cheese looked tastier than it actually was, while the blood sausage’s taste did not surprise either positively or negatively.

The only other inhabitants of the board were a glass of pretty standard Liptauer, an industrial tube of mustard, another small glass with tasteless Grammel (baked pork fat), a pickled cucumber, a cheese-stuffed pepper and, unusually, a half-slice of bread with a creamy spread seasoned with some herb.

For a tourist place such as Zum Martin Sepp, the Brettljause has actually succeeded in delivering a couple of surprises. However, one cannot help thinking that it was not intended as a stand-alone dish, but as a starter to be shared while waiting for something more substantial like a roasted pig.