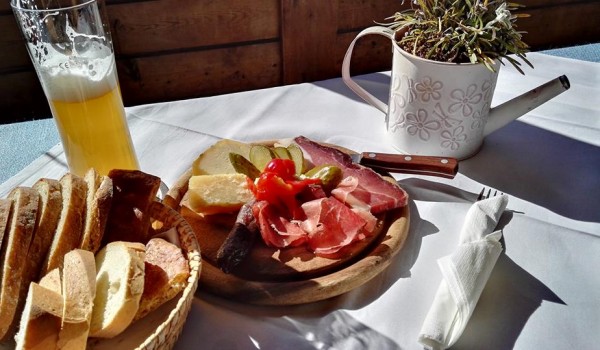 Bad news first: this Brettljause looks much better on paper than in real life. The menu talks about Graukäse (grey cheese) and thinly cut beef, but the fact is this is still a typical thickly-cut Marende in all but two additional components. The Graukäse had a distinct taste reminding one of the more intimate parts of a cow (but not as extreme as the grey cheese of Styria), while the beef was the clear highlight of the dish, offering a predictable, but untypical for a Marende, taste.

The rest was bog-standard, unfortunately. Before becoming remotely edible, the Speck had to be separated from the outer and inner skins, then from the abundant fat, and then from the dry “outer” meat (I start to crave for the good old easy-to-eat Austrian Wurzelspeck, where things are so much simpler). The Kaminwurzen turned out to be as dry and boring as ever, and the “non-grey” cheese did not surprise me in any way, apart from still featuring a piece of paper with the producer’s name glued to its crust.

At the end it was more of a fight than an enjoyable lunch, culminating in 7 (seven!) people including three kids joining my table at a later stage, due to the lack of tables outside. On the other hand, the lack of table space is totally understandable, since the Rauch Hütte has one of the best locations on the Seiser Alm, with a breathtaking view over the surrounding mountain scenery. If only they paid as much attention to their Marende as they do to their wines, it would be a must-visit destination.