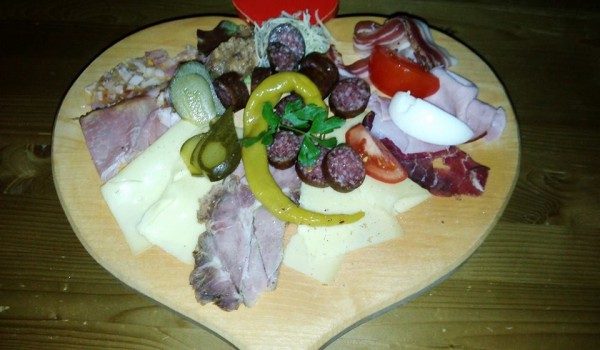 It’s my second and unfortunately the final day in the Tux valley, and I am slowly becoming tired of getting wet. “It still must be better than the +37ºC heat in Vienna,” I tell myself as I rush uphill, the thunder booming right over my head and the lightning threatening to hit my by now pointless umbrella. Tyrolean thunderstorms are brutal.

Christa’s Skialm was the obvious choice simply by being a few meters closer than the other three Brettljause-serving restaurants on the Penken mountain. It’s a crowded (unsurprisingly) place with self-service only. Two seconds after my sitting down, a small girl, running, hit her temple against the edge of my table with a loud thump, making me a bit concerned about the table’s well-being. It survived. A few minutes of screaming ensued, but the girl seemed to survive, too, at the end.

The Jause arrived on a ridiculous heart-shaped Brettl and looked rather scarce, especially for the 12 Euro that I had paid for it. Everything appeared in two thin slices: two types of ham, Schweinsbraten, Speck, jelly and two types of cheese. One kind of dark meat managed to appear as a single slice only, so I couldn’t even figure out what exactly it was – possibly salty smoked beef. The brown Grammelschmalz once again proved to be the highlight, as well as a long Tyrolean sausage cut into tiny slices (fortunately, more than two this time).

With all the gratitude for saving me from the pouring rain, I found Skialm too dark and hectic for my liking. Their Brettljause is competent enough, but the two places I had to visit later for a beer – because the rain just would not stop and the cable cars were not operating as a result – looked much neater, had full service and also featured Brettljausen on their menus.