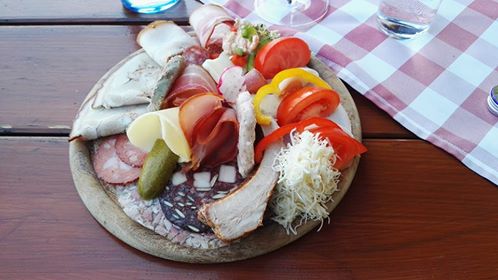 Having passed the Eoryschenke yesterday I knew it would be the final destination of my today’s trip. Both the location and the menu of this old Buschenschank, built on top of a 500-year-old wine cellar, looked very promising. It looked much less promising when I finally reached it, with the garden being totally empty (fully understandably in a way, as with the sun disappearing behind the hills, the temperature went down at least 15 degrees at once). Ten minutes later a bus pulled in, bringing half a hundred of tourists and a trio of seriously bad musicians, who first went on a tour of the cellars and then settled down inside the restaurant.

The Brettljause, I am sad to say, looked great but did not work for me at all. It was absolutely full of all kinds of stuff, including some goat cheese and a piece of cold spare ribs. I would not even try listing all the ingredients here, but there were at least a dozen of them. Unfortunately, at the end they did not taste as differently as they looked. Also, some of them – Speck in particular – contained a very thick and impossible to chew skin, which one does not expect as part of a thinly cut sausage.

I made the mistake of starting with the liver spread – the part I usually like least – and realized it tasted too much of liver for my comfort. The second ingredient – the Speck – filled my mouth with the above-mentioned skin, which I had to run to the toilet to spit it out. Things improved after that, though I could not force myself to try the blood sausage and the jelly. The Geselchtes was actually very enjoyable, although featured as a single slice.

I don’t know whether I came at a wrong moment, or if having another Brettljause four hours earlier have spoiled my appetite, but Eory’s creation just did not cut the mustard for me (by the way, South Styrians do not seem to know what mustard is, or don’t care anyway). It was very varied, very well presented, but just not very good. If I had to recommend, I would say, give it a chance. Your experience may be different from mine, especially if liver is your thing.