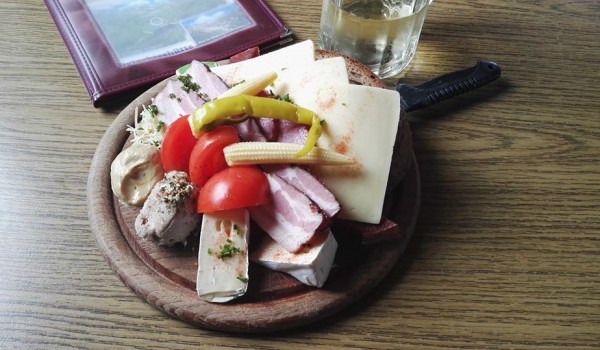 My short holidays this year started with a snow, continued with a fog, so it was only logical for them to end with a snow and a fog. Not that I expected anything else when taking the bus to the Ursprungalm and then walking up to the Giglachsee. It’s very remote, it’s very high, and it has a hut next to it, which I have somehow missed in my earlier Brettljause expeditions.

Due to its location, it was quite unreasonable to expect the Giglachseehütte to serve anything of its own production, the question primarily being how far a supermarket they would dare visiting to replenish their stock of sausage and cheese. On my way to the hut, I saw at least two cars and one electrical bicycle stuck in the snow, so my expectations were quite low. I shouldn’t have worried: the hut managed not only to have all the ingredients ready, but also to combine them in a rather satisfactory fashion.

Mind you, the ingredients were still absolutely industrial, one piece of soft cheese still in its Rupp wrapping. Another type of a soft cheese was present (always a welcome sight), as well as two long thick slices of Speck, a Kantwurst (from Handl, must likely), some Bergsteiger sausage, a few slices of normal (read: „tasteless“) cheese and a Verhackertes of no particular flavor. However, the way the dish was presented – with plenty of bread, strong horseradish and spices on the Verhackertes (unfortunately not very spicy) – did indicate that some love have gone into it. And the shout „Aaaa Mosht! Aaaaa Shprizza Mosht!“ the friendly mustached owner produced when delivering the drinks was simply inimitable.