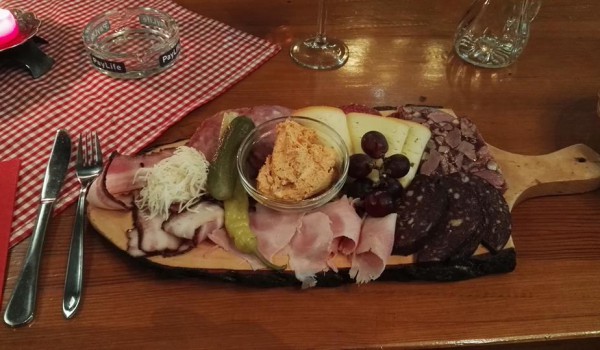 I have always found that the translation “cold cuts” does not do a Brettljause justice. It is like translating “Speck” as “bacon” – every dictionary will say it is correct, but compare the taste of Tyrolean Speck to English bacon, and you will not believe they are coming from the same animal.

In the case of Brettljause at the Esterhazykeller, “cold cuts” is the absolutely appropriate name. It is not because almost everyone at this tourist-oriented cellar speaks English (apart from a very pissed Austrian sitting at the table next to mine who got kicked out of the restaurant when demanding another beer), it is because the cold cuts are exactly what the dish was all about. The cook simply took some sausage from the fridge and cut it.

Well, to be honest, I guess that’s what the cooks do for every Brettljause, but the sausage the Esterhazykeller served was so cheap and industrial, I could probably correctly point it out at any food store. Speck, salami, Blutwurst, Wienerwurst, the cheapest, blandest ham and the Traungold cheese were so supermarket-y, I would be ashamed to serve them. The tourists did not mind, of course, but then they probably never had a chance to visit a BILLA or a SPAR.

The only two ingredients that saved this Brettljause from being a complete rip-off were, strangely enough, a pork jelly (maybe because I would never willingly buy it at a supermarket) and a Liptauer-like spread, which was so over-salted it was even original. The bread was very far from being fresh, and the grapes looked totally out of place next to a Pfefferoni and a salty cucumber.

An innocent tourist spending only one night in Vienna, willing to try a Brettljause but too afraid to leave the first district may end up in the Esterhazykeller anyway, no matter what I say here, but for all the others my advice is “avoid!”