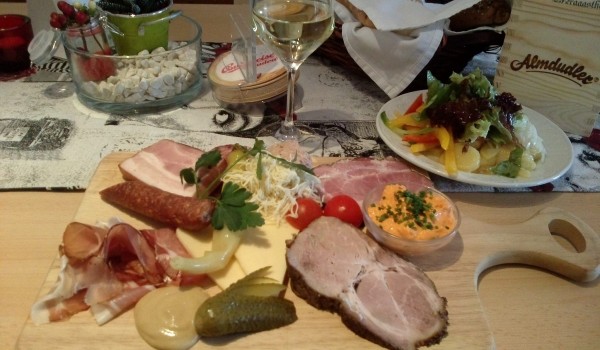 Now, this was unexpected. Last time I checked (which could not have been long ago), this restaurant did not have a Brettljause, and frankly I did not expect much from this too conveniently located and never especially inviting establishment on the top of Bisamberg. The owner changed, however, and today I not only found the Jause on the menu, but was also quite shocked when it arrived on my table: it looked amazingly good, way better than any other I have seen in Vienna, and comparable only to some Mostbaron creations from the Mostviertel and super-authentic home-made stuff served in mountainous Styria.

Everything in the Brettljause, apart from Bauchspeck (and the spreads, obviously) was thickly cut and absolutely huge. The Schweinsbraten alone could have constituted a complete dish all by themselves, but they came with only slightly smaller cuts of cheese, Geselchtes and a different, paler type of Speck. In addition, there were two thick pieces of salami, a generous part of a long salty sausage and a big ball of Schmalz. It really looked like a textbook Brettljause: no “mandatory” ingredients such as pickled cucumbers, horseradish and mustard were missing; the egg was, sadly, absent, but unfortunately, it has never been a must in the cooks’ view.

It is unfair to say that it tasted worse than it looked, for it’s simply because it looked too good. That, and because one had to admit that the whole Brettljause could have been (and undoubtedly was) crafted after visiting a supermarket. Absolutely everything on it tasted industrial, with the exception of the horseradish, which was so strong it made me cry. The salami had the slightly bitter taste of Hungarian sorts, the Speck looked exactly like the one available in a plastic wrapping at Billa, – but strangely in this case it did not bother me. The thing is, it could hardly be different: Magdalenenhof does not produce anything itself, and having direct contacts with outside producers does not make much business sense, as that won’t bring more visitors than they already have. Actually, the way they presented the Brettljause was so positively unusual, that at one point I was planning to award them the never-seen-in-the-capital 8 points and crown them the Brettljause-kings of Vienna.

I changed my mind when I started struggling to finish the dish. It was far too big, and the more one eats something, the more critical one becomes. I was quite hungry to start with, but at the end I even had to stop eating the bread (very fresh and coming in different types, but not included in the price of the Jause), so that some space in my stomach would be left for the meats. Still, if you are very hungry and do not have high anti-industrial standards, Magdalenenhof is currently a must-visit Brettljause place in Vienna.