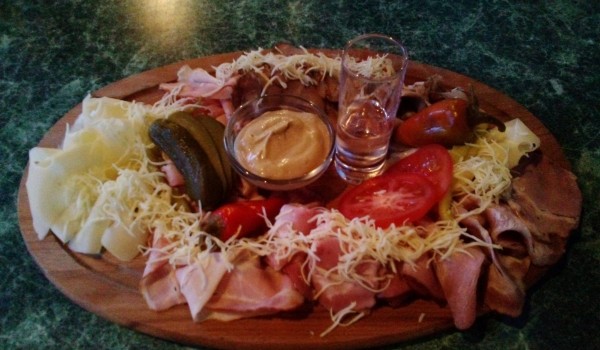 Gasthaus Hansi used to be located in an old and quite disgusting house close to Kagraner Platz. Recently it has moved to a much nicer building with a large garden at the edge of the Lobau Park, replacing a Chinese restaurant. The place still looks a bit Chinese, with decorative roofs and a pond with a tiny bridge over it, but the menu is now very traditionally Austrian. It is commendable that the Brettljause of the “old Hansi” has not only moved to the new location, but has improved somewhat, while getting a new name.

To start with, it has got a new ingredient. In addition to bland cheese, Schweinsbraten and Speck, it now features some Geselchtes. It also looks much better – the ingredients are arranged on the board quite creatively, creating a false impression of variety and are absolutely covered with horseradish (which is unfortunately not as strong as I would have liked). Also new are two quite hot peppers, requiring an extra beer to wash them down. The complimentary Schnapps is still there, and the dish remains very cheap.

My complaints are mostly about the bread, which was strangely warm, as if someone heated it up to make it appear fresher (which was exactly the case, I am quite sure). Besides, the garden is full of mosquitoes at this time of the year, forcing one to eat quickly or be eaten. Apart from that, there is not much wrong about Hansi’s Tiroler Jausenplatte, though the only thing Tyrolean about it is its name.