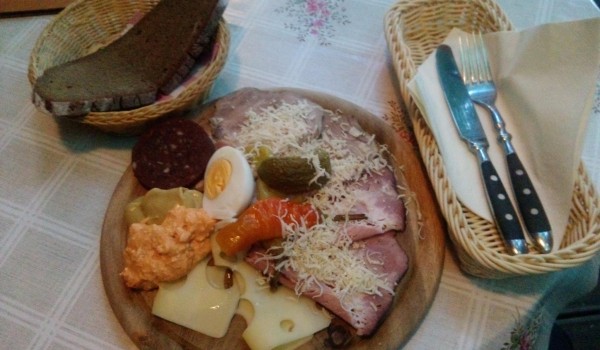 There are three wine districts in Vienna: the 19th (Döbling, Neustift, to a slightly lesser extent Sievering) is nearly completely tourist-oriented; the 21st (Strebersdorf, Stammersdorf) is mostly frequented by Austrians and educated foreigners, especially those who have lived in Vienna for quite a while; finally, the 23rd (Mauer) is essentially tourist-free, in part because it is so bloody hard to reach. (Anyone who claims that Ottakring (the 16th) is the best wine area requires some serious medication.)

Zahel has a smallish (and packed) garden and the reputation for producing some of the best wines in Vienna. Their Gemischter Satz did not convince me, but their other selection of wines looks impressive, and the quite pricey Chardonnay (not produced by Zahel, accidentally) was actually rather enjoyable. The Heuriger is very authentic, musicians are nowhere to be seen, the waitresses are efficient, and one would easily expect a better-than-average Brettljause.

Except that they don’t have one. Their Winzer Jaus’n is unimaginative, over-priced and far too small. The blood sausage is very plain and not helped at all by the industrial mustard; the pork jelly is equally boring. The Liptauer spread is spicier than in most other places and quite good, but it quickly consumes the single provided (at an extra cost!) slice of bread, leaving the customer one-to-one with a tasteless holey cheese, Schweinsbraten and Rauchschopf – all represented with two meager slices.

The Schweinsbraten are the best of the bunch, making you wish for more, especially with a horseradish that would show any level of strength instead of being a pointless tasteless decoration. The Rauchschopf is also acceptable, but a bit of Speck, salami or Schmalz – or whatever, actually – could have improved the Jause easily. Some may call Zahel a hidden gem, but from the Brettljause point of view, it’s more hidden than a gem.