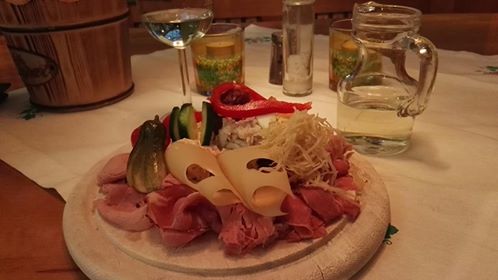 I hate violating other people’s privacy, and unfortunately that’s exactly how Legat makes you feel. It’s someone’s home – not more, not less – and everything, including the way the waiters/owners move around and take stuff from the shelves seems to remind one that one is nothing but a guest intruding on someone’s private sphere.

The Brettljause (sorry, the Bretteljause) of Legat is not exceptional. It’s basically a collection of standard South Styrian stuff – Geselchtes, Brüstl (sorry, Brüstel), a rather tasteless hard sausage, a rather tasteless cheese, Liptauer, and some fat Verhackertes spread combined with an overload of a liver spread. Everything is thinly cut (except the spreads, obviously) and is quite OK in a non-demanding way. Nothing to write home about, though.