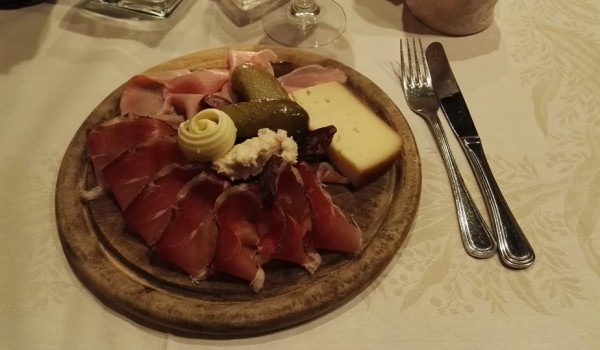 No one expects to go to an unfamiliar city and get a great Brettljause the very first evening. Visiting Bozen (Bolzano) for the first time in my life, I certainly did not expect one, and, well, I did not get it.

Today being Friday and all the restaurants being absolutely packed with people, I ended up in probably the most tourist-friendly place, belonging to Forst, the king of South Tyrolean beers, whose Sixtus I quite appreciate since my last holidays in Merano. Strangely, it did not look as if the restaurant was full of tourists tonight, with most people speaking Italian and coming in groups or families (perhaps they were all Italian tourists).

The Tiroler Brettl of Forsterbräu is a typical South Tyrolean Marende in everything except the ham, which was a welcome and good quality addition to the predictable Speck, Kaminwurzen and cheese. Actually, everything on my Brettl was quality stuff, with the thinly cut Speck tasting so much better than anything from Austria (Salzburg included – sorry, Salzburg), and the thick slice of cheese having not very strong but distinct taste.

The rest of the Brettl looked quite Spartan, the only other ingredients being butter (quite insufficient), creamy horseradish, and two pickled cucumbers. On the other hand, the choice of bread was up to Italian standards, including the tooth-breaking Schüttelbrot, which I have to learn liking again.

The restaurant’s atmosphere started hectic but got much better once people began to leave. Better still, there are at least two or three other Marende-serving places on the same street, which means that my menu for the next four days is more or less fixed.