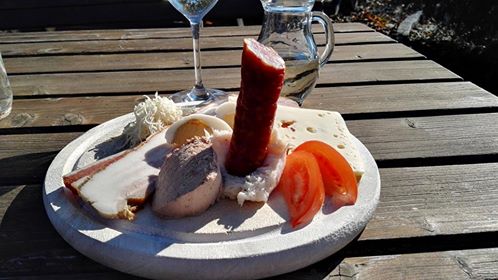 I wonder if according to the religion of flies, those who die by drowning in a glass of wine go straight to heaven. Perhaps only those who die in my wine glass go to heaven, in which case I should be proud to be the God of the Flies or something. Except that it’s bloody annoying. Not less than four insects ended their lives in my wine (more later at other Heurigers), forcing me to spill some of wine on the ground, which I really hate doing.

No one died in my Bauernjause though, and it can very well be because it was rather worse than the wine. This was my first encounter with the Brettljausen of the South Styria, and having had two of them, I start to see a pattern. First, South Styrians don’t salt their meats enough. Even the Speck had a really bland taste, and I had to put salt on the Schweinsbraten to make them even remotely tasty. Second, they love liver. The liver spread was much biger than I personally find comfortable, and only the fact that it did not taste too much of liver made it kind of acceptable. Last, the South Styria is fond of fat. What they call Verhackertes here could have easily been confused with Schmalz in Lower Austria for being very white, very meat-free and, well, very fat. The Speck and the non-dry-enough Schweinsbraten they call “Brüstl” here had so much white stuff on them that even I had to cut parts of them off.

To give the full list of the Bauernjause’s ingredients, these were Speck, Brüstl, Geselchtes (again, far less salty that I am used to), a half of a sausage that would have been salty anywhere except here, Verhackertes, liver sausage spread, and some tasteless cheese. Honestly, finishing all of these has required some effort and quite a lot of liquid. On a positive side, the location of the Heuriger and the garden are fantastic, though the weather must have played a role too: sitting outside in the sun on the 6th of November is always nice.