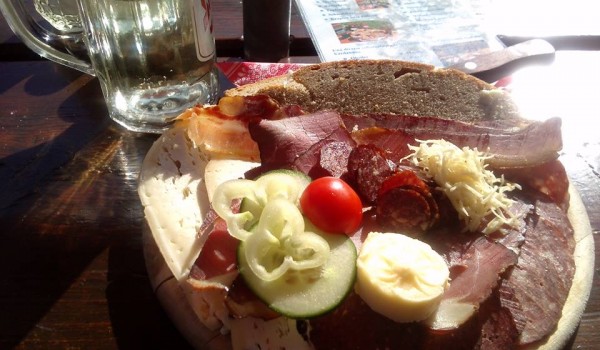 I keep on saying that ordering two Brettljausen on the same day is never a good idea, yet repeatedly fall into the same trap. This time, it was at Fundneralm, approximately one hour downhill from the Brandner Alm, in the direction of Bad Hofgastein. “Cheese and sausage from the home production,” the menu claimed, and this being my last day in the Gastein area, I could not resist.

Despite the fact that the Brettljause looked better than the Brandner’s offering, it took just a few seconds to understand that I was not at all hungry. The Speck came in at least three thick slices, as did a spicy cheese with peppercorns. Apart from the obligatory hard sausage – cut into tiny slices – the Brettljause also incuded some rather dry, fatless and heavily smoked ham, something that looked like a Wiener (or maybe a Bergsteiger sausage), and a dark salami with very little fat, which could have very well been made from lamb.

Were they good? I believe so, because despite the effect the Mosts (and the earlier beers) were starting to have on me, I felt really bad when it became clear that I could not empty the plate. I did try a bit of all the ingredients, however, and was thinking of taking a short break and then having a second round when the owners’ dog arrived.

Well, if you feel like trying a Brettljause but are concerned about your weight, such a dog is an absolute blessing. It stated by swallowing the skin of the Speck I managed to eat; it continued by devouring the rest of the Speck (skin included), the meats, the peppery cheese, and finally the remaining slices of bread. Then it brought me a tennis ball and insisted on playing fetch until I accidentally threw the ball into a barbwire surrounded pasture area. I have not seen the dog afterwards, but have not heard any howls or barking either, so I assume it survived.

I am not sure it is fair to rate this Jause having eaten hardly a third of it, but the general impression it left was very positive. Next time, though, one Jause per day will suffice.