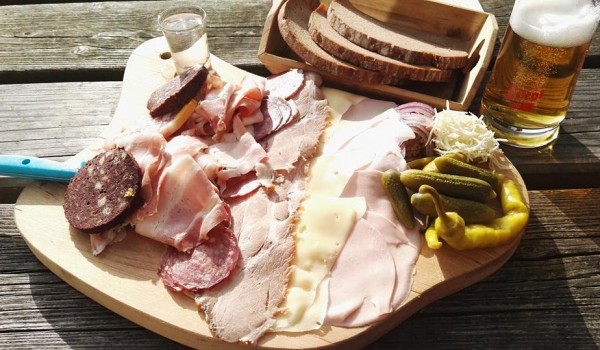 The Brettljause of the Speckbacherhütte, located on the Kreuzberg hill between the town of Payerbach and the village of Breitenstein and providing a very nice view over the Semmering area and the Rax mountain, has been successfully evading me for several years, partly because of the strange decision of its previous owner to serve the Jause after 2 p.m. only. A new owner took over the hut about a year ago, and appears to have no reasons – religious or otherwise – not to offer the Brettljause at all times.

I doubt that was the main explanation for the hut to be as full as it was today (pleasant weather being a more likely reason), but it took me almost twenty minutes until one of the benches in the garden became free. Fortunately, the Brettljause was quite worth the waiting time. Although not surprising me with anything not found in a supermarket (apart from the dark brown Schmalz, which can probably still be found in a supermarket if one searches long enough), it was a competently built offering, with Schweinsbraten, Blunzen, cheese-filled salami, Extrawurst, some cheese, pork jelly, and lots of Speck creating an impression of something big and varied. And quite heavy it was, too, the Speck being of the pale kind, making it difficult to distinguish meat from fat. Probably recognizing that fact, the owners included a small glass of Schnapps with the dish, which was very welcome.

Generally, it was a “positively average” Brettljause, the type that does not disappoint by being average, but rather fully satisfies one by its averageness. And the Kreuzberg is a good place to visit from time to time in any case.