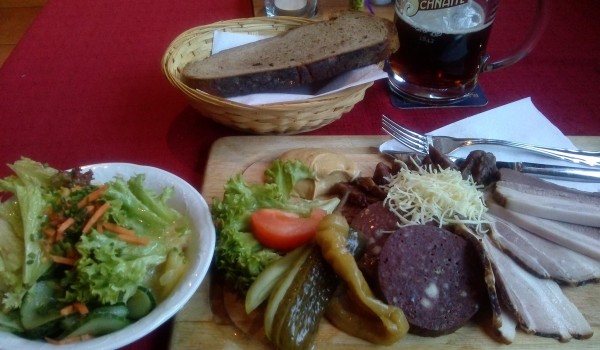 The Jubiläumspark in Mödling is not really a serious hiking destination. It takes about 15 minutes to reach it from the center of the town, and that only if walking slowly. All the more remarkable that Mödlinger Kobenzl tries to make its Brettljause look like something normally found at the end of long hiking trails in the mountains rather than quickly bought at a supermarket.

It has only three ingredients: a salty Hauswurst cut into small round slices, a blood sausage (Blunzen) cut into big round slices, and a Speck, which looks to be of two different sorts until you realize that it is the same stuff cut differently. The Blunzen, being the most unpleasant of the three components, had to be eaten first, generously covered with mustard and horseradish. Unfortunately, that also consumed a half of the bread, totally inadequately represented by a single slice.

The Hauswurst turned to be much better, if a bit too hard for my teeth, which recently feel tired after numerous dentist’s visits. The Speck, which I expected to be the highlight of the show, ended up a disappointment, having so little taste, that I managed to improve it considerably by simply adding salt. Any Speck that gets better through being salted is a very strange Speck indeed.

And that was it, the Brettljause was over, leaving me craving for a bit of strong cheese but certainly not for more of the same meat. Mödlinger Kobenzl is a nice place to visit, and the Brettljause was not at all as catastrophic as the above may make it appear, but if you choose something else from the menu when you visit that restaurant, I will be the last person to blame you for your decision.