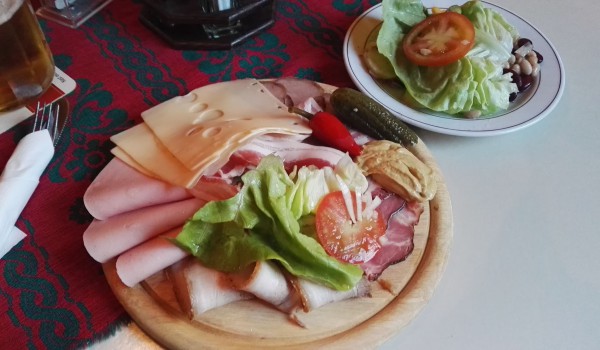 What kind of a Brettljause can one expect in Vienna for only 4 Euros? Even in the ass of Vienna, such as Erlaa? As it turns out, a completely normal one, both in terms of size and in terms of taste.

Unlike the 2-Euro salad, which looked (and tasted) very sad, the cheapest Brettljause of the Austrian capital can easily compete with average Brettljausen anywhere. It provided sufficient variety by including cheese, two kinds of Schweinsbraten, Speck, Geselchtes and Extrawurst. The Speck came in very narrow and very fat stripes, which took very long to chew – not the sort of Speck I prefer. The cheese and the Extrawurst would not win any awards either, but the Schweinsbraten and the Geselchtes were absolutely edible and even enjoyable. They certainly did not taste like having been bought at a supermarket and just taken out of plastic. I suppose buying huge chunks of meat and cutting from those chunks helped to keep the price down, and I would be the last one to complain about that decision.

Unfortunately, the restaurant’s shady garden was not open, otherwise I would have definitely sat outside rather than in the simple Beisl-like room, surrounded by worker-type locals. On the other hand, being inside allowed me to take a peek at the perfectly clean kitchen with a young cook wearing spotlessly white cook’s garments. Somehow that surprised me even more than the Brettljause’s low price.

Frankly, there is no reason to go to Geyer for the sake of tasting the Brettljause. It’s much better than I had expected, but not special in any way. On the other hand, it is very nice that places like Geyer still exist, and one feels good spending money there. Especially if the amount we are talking about is so small. 4 Euros will hardly buy you a mug of beer in the city center; they will not buy you a pack of cigarettes; but they can buy you a perfectly OK Brettljause that is just as (and probably more) unhealthy.