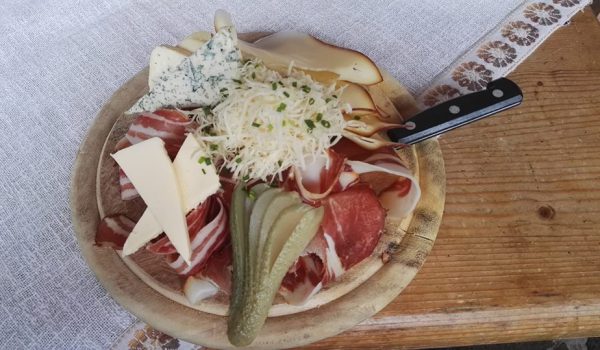 Each time I travel to a place I’ve never been before, I start by googling its location and finding one establishment serving a Brettljause. After all, if there are none, what is the point of travelling? To leave my options as open as possible, I don’t check anything else (apart from the hotel details and train schedules, obviously), so any additional Brettljausen I find are the result of pure chance or of some information obtained while at the location itself.

In the case of Bad Kleinirchheim, this “default” location was Trattler’s Einkehr, which impressed me by having a Brettljause featured in its otherwise quite expensive menu (well, at 13.80 Euro, the Brettljause was not what I call cheap, either). It took me two days to reach the restaurant, and frankly, the alternatives were too numerous and good to make me at one point consider dropping the whole idea altogether. But a rule is a rule, so here I am, sitting under a roof in the Einkehr’s rather pleasant garden, with a pouring rain all around me, and not very hungry, having finished an impressive portion of spare ribs just an hour and a half ago.

There are just two characteristics that make this Brettljause stand out from the rest. First, it’s Speck-heavy: the two types of thinly-cut and rather fat Speck it had covered the major part of the Brettl. Second, it contained blue cheese, which, to be honest, I don’t remember seeing in any Brettljause before. There was a second kind of cheese, too, a thick slice of something of no particular taste, looking a bit like the Carinthian Glundner cheese, but ultimately much more conventional.

The Brettl also contained two spreads, hidden beneath the Speck and therefore not visible on the photo. The Verhackertes was by far the better one, having an almost exquisite taste, especially in comparison to the second, white cheesy/garlicky one. Finally, there was a third type of cheese, lightly smoked and served in thinly cut slices, thus creating an “industrial” impression. In fact, I wouldn’t be surprised if all the ingredients of this Brettljause came from one of the two supermarkets available in Bad Kleinkirchheim. Quite often, supermarkets in small towns and villages sell locally produced cheeses and meats, and these can be incomparably better than the plastic-wrapped stuff in the cities.

Reassuringly, the Brettl was full of horseradish, though totally lacking of mustard. Generally, the Carinthians seem to prefer serving a lot of butter in place of mustard – a fine tradition that I have absolutely nothing against.

The end result was a solid, quite enjoyable Brettljause, which could have been much more enjoyable had I been hungrier. I would not go as far as to recommend it as a must-have in the village, the alternatives being too plentiful, but visiting Einkehr for any kind of food is probably not a bad idea overall, and sharing the Brettljause as a starter among 2-3 people is something to consider.