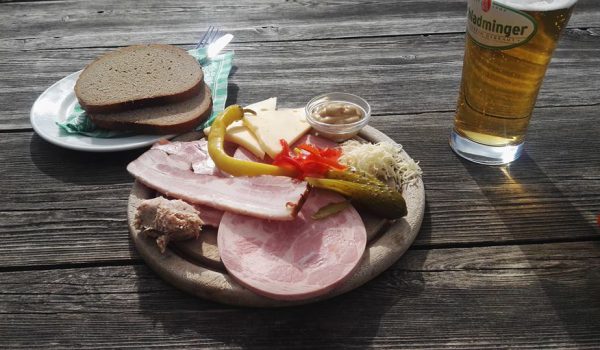 Looking at booking.com and trying to make a reservation in Ramsau in the middle of October may create an impression that the entire Austria – and half of Europe, too – have decided to come here and enjoy the “golden autumn” that the advertisements are so keen on mentioning. The reality is that the area is about to enter its hibernation stage before waking up in December for the winter season. There are still a few tourists around, but more than half of the hotels are closed, the hiking buses and the cable cars are not operating, the marmots have all gone to sleep, and the huts are trying to get rid of everything that is still in their fridges.

Not that all this affects the Südwand-Hütte in any way, as I seriously doubt they actually own a fridge. Located directly on the south wall of the Dachstein mountain, 40 minutes walking from the cable car’s station, it is not reachable by any road. All the goods have to be brought there either by hand or by using an ancient material cable car. The fact that they manage to maintain a comprehensive menu is quite an achievement by itself.

The Brettljause is, as expected, not fantastic. Its ingredients are reassuringly thickly cut, but most of them clearly have supermarket origins. Mind you, they still taste better than those of the Kaiblingalmhütte, but only marginally. Instead of Extrawurst, they serve Krakauer here; the Speck is more reasonably sized and is accompanied by some Geselchtes. Schmalz is replaced by Verhackertes (the best part of the dish). The cheese and the Wiener sausage are unfortunately the same and just as boring.

And their bread is bad. It is not really fresh and not of a kind I like. Fortunately, the alpine choughs had a different opinion, and part of the bread went straight into their hungry beaks. At one point, faced with five of the birds – two of them right on my table and happily shitting while devouring the bread – I started to question the wisdom of my generosity. But then they found a different victim and left.

I have no problem leaving money at places like the Südwand-Hütte, because they make the world better. You can enjoy a cold beer (maybe they do own a fridge after all) or some Kaiserschmarren, and the view from the terrace is terrific, but their Brettljause is average, and I am actually being kind with that rating.