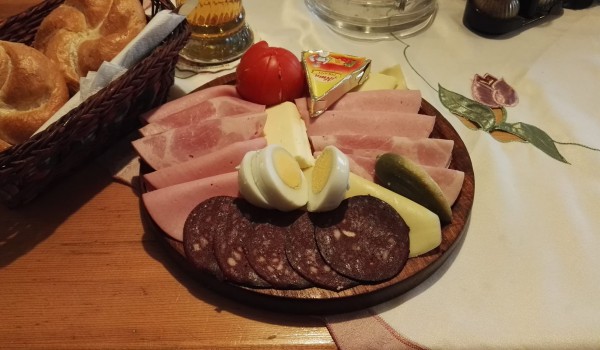 Occasionally there are situations when giving a less-than-average score to a Brettljause makes one feel like a complete asshole. Here is a case in point. Having noticed a Brettljause on the short menu outside the door of this tiny restaurant in the middle of nowhere, I walked into an empty room and instead of leaving immediately, waited and even made some noises in order to attract attention. Eventually I was greeted by a nice woman in her late eighties, who could hardly move and had to lean heavily on her walking stick. Nevertheless she insisted (despite my offers of help) on delivering the Brettljause and the beer to my table. How can I seriously say that the “atmosphere/service” of the place was below average?

Well, the asshole that I am, I can, but just because of the atmosphere bit. The restaurant was just too small and too locals-oriented for my liking. And no one likes to be the only one eating.

The Brettljause was not good, which was somehow expected. The Extrawurst, the Krakauer, the blood sausage and the cheese had come straight from a supermarket (the Extrawurst still had a piece of wrapping paper attached to it). The Jause also included a triangular slice of a paprika-spiced cheese that was still wrapped in aluminum foil, as sold in a pack of six in a round box. On a positive side, the two bread rolls were very fresh, the butter was plentiful, and having a full tomato and a full egg in a Brettljause is always nice.

That’s it, actually. It could have been worse, but it was not good, and taking a detour from the Kamptal to Tautendorf just to try it would be a waste of time. Still, illogical as it may sound, I sincerely hope that I eat much worse Brettljausen in the course of the year. When the year is over and I have to name the best and the worst of 2016, I would really hate it if this one appears at the bottom of the list.