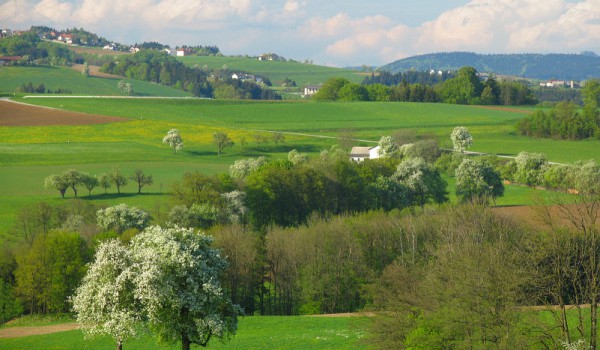 For a couple of weeks at the end of April, the Mostviertel region of the Lower Austria turns into the most beautiful place in the country. That is the period when the thousands of pear trees are in full blossom. Arrive too late, however, and the area loses its charm almost entirely, turning into a boring hilly landscape where the quadrangular farmsteads (the “Vierkanter”) all look the same and where the only means of hiking is along busy and dusty asphalt roads.

The Mostviertel is also home to the famous Most, a fermented pear cider or perry. While Most is available almost everywhere in Austria, the Most of Mostviertel successfully differentiates itself by being quite drinkable. While in other regions Most is usually produced out of apples and has a sour taste, Mostviertel’s Most is pear-based and is much sweeter and fruitier. It is also quite dangerous, as its alcohol content is not always known. I have tasted everything between five and nine percent, which makes a huge difference once you consume three half-liter mugs of the drink in one go. On the other hand, one can also occasionally stumble upon a completely alcohol-free Most (so called “Süßmost”) and end up quite surprised why one is not getting drunk.

The most logical place to try Mostviertel’s Most is in one of the area’s numerous taverns, the Mostheurigers. There is, however, another good reason for vising these taverns: the Brettljause of Mostviertel is easily the best in the entire Lower Austria. Far away from the tourist locations of the Wachau Valley, the Heurigers of Mostviertel cater for the locals. Their meat-heavy Brettljausen nearly exclusively consist of the produce of the local farmers, and the farmers obviously know well how to get the best out of their pigs. The pork comes in all varieties, from surprisingly edible blood sausages to slightly off-putting gray liver spreads, wonderful cold spare ribs, Speck of all kinds and the Mostviertel’s specialty: a potato dumpling filled with lightly smoked meat.

A long but probably incomplete list of Mostheurigers is available at http://www.mostheurige.com/, but in a rather effective marketing move, someone has come up with the idea of selecting a small number of Most-related establishments, awarding them the title of “Mostbaron” and creating a special website, http://www.mostbaron.at/, where people can easily find these evidently best sources of all things Most. There are a couple of hotels among them as well as direct retailers, but most importantly, there are nine Mostheurigers, all of which I had the pleasure of visiting and can heartily recommend.

What distinguishes Mostbaron Heurigers from the others is, to start with, a wide variety of Most sorts they offer. They also serve three “gourmet” Most types: Brous, Preh and Exibatur, which, while being another clever marketing trick, does not however diminish the fact that they are all quite good. The Mostbaron’s label usually means that all the Most products, as well as other related stuff such as locally produced jams and mustard can be purchased to take home. And, very importantly, all these Heurigers have extensive menus, offering multiple types of Jausen.

The most expensive one is usually the “Baronjause,” supposedly containing all the best stuff the Heuriger offers (and more often than not served on a pear-shaped wooden board). In practice, these tend to be slightly overproduced creations including unusual ingredients, such as apples, that one can easily live without. Then there is usually a cheaper and more down-to-earth Brettljause and sometimes a “Vierkanterjause,” which is slightly lighter than a Brettljause and not as sophisticated as a Baronjause. And then there is my personal favorite: a Bauernjause (a “farmer’s snack”), which is similar to a Brettljause but with thickly cut meats, resulting in a much tastier and authentic experience.

A couple of words of warning: Mostbaron Heurigers are only open on certain weekends, and checking the Mostbaron’s website for the opening hours is essential. They are also quite difficult to reach by public transportation, so expect a one to two-hour walk from the nearest railway station (traveling with a car and therefore not drinking should not be considered as this destroys the purpose). Finally, do not discount other Mostviertel’s Heurigers simply because they have not achieved the Baron’s award: paying them a visit is still highly recommended, and there is more than one real gem among them.