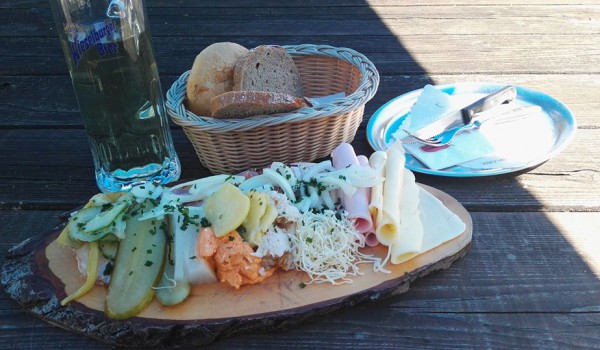 I am not sure there is such a thing as an allergy to peacock feathers or an intolerance towards peacock sounds, but if you are suffering from either of those, be warned: this Naturparkhaus is not a place for you. This tiny snack location, also serving as a ticket office for the nearby animal park, is full of the stupid birds, walking among the tables of the garden and even waiting patiently outside the door as if intending to get inside.

In addition, this Naturparkhaus offers a surprisingly good Brettljause for an eatery that one would not dare trusting for anything except coffee, ice cream and perhaps a beer. While it makes no attempt at pretending that the ingredients come from the own production (which may be a good thing, as I have not heard anything positive about peacock meat), the Jause looks – and is – very varied and nicely presented, and everything tastes very fresh.

The Speck, Schweinsbraten and ham constituted the best part of the dish, while the cheese and the Extrawurst were expectedly boring. The only interesting thing about the Salami slices was their unusual square shape, while the taste would not win any awards. The Schmalz, on the other hand, would have been one of the highlights, had not the cook made the fatal mistake of placing it so close to the Liptauer spread that the two intermixed, destroying the taste of both. It was also an interesting, though flawed, idea to add tiny bits of potato and cucumber salads to the Brettl. Unfortunately, these inherently watery ingredients were placed in the middle of the dish rather than on a side and thus dampened everything around them.

Still, sitting alone in the garden (it was too early for the visitors to start their lunches) and savoring the unusually warm April sun was a great way to start my yearly visit to Waidhofen. Besides, with the other two Waidhofen’s Brettljause providers (Wachauer and Zötscher) appearing to have closed, the Naturparkhaus remains the only place known to me where cold cuts can be enjoyed.