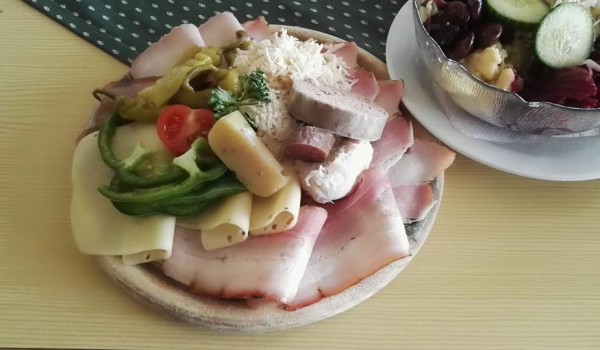 Plabutsch – the hill/mountain on which this Heuriger is located – must be to Graz what Kahlenberg is to Vienna: a high place with a nice view over the city (just without the convenience of being reachable by bus). Because of that, and also because I had read a couple of scathing reviews mentioning the unfriendliness of personnel, I did not have high expectations, thinking of a tourist-oriented establishment with a boring Brettljause and a standard selection of wines.

As it turned out, there were no tourists and no wines, but quite a lot of locals with kids and dogs and a variety of Most sorts that can easily compete with the “Mostbaron” Heurigers of the Mostviertel (and lose, but not by much). The restaurant itself did not look especially cozy (though the waiters were friendly) and although the view over Graz was nice enough, the surroundings and the path to the Heuriger turned out to be quite dull. On the other hand, rainy mid-February might not be the best season for a visit.

The Brettljause started badly: when the plate arrived, the most prominent ingredient on it was a thick round portion of a liver spread, with the transparent skin still on. It took me at least five minutes, a whole mug of Most, half a slice of bread and a half of a salad plate to finish that unpleasant part before switching to the rest. The salad definitely helped to hide the taste, but if I ever come to the Fürstenstand another time, I will specifically ask to skip the liver.

What remained, however, was another proof that Styria is the Brettljause center of the world. It was not extraordinary in Styrian terms, but compared to what one normally finds in and around Vienna, it was incomparably better. To start with (for the particularly stingy among the readers), it was super-cheap: six Euro without bread for something that takes a lot of time, effort and hunger to finish. Second, it was hugely varied: three spreads, two cheeses and five or six types of meat and sausage.

Quality-wise, it was a mixed bag. The best were the homemade salami and a very dry ham – both unfortunately hardly visible on the photo. The tiny slice of a long salty sausage was very tasty but really insufficient. The small piece of cheese in the middle of the plate immediately brought back the memories of green mountain pastures, happy cows and the products of the cows’ digestion that they leave on the pastures. In short, it was extremely good, and the quantity was just right in that case.

The other ingredients were OK, but less exciting: the second type of cheese was a tasteless sort, the Verhackertes contained plenty of fat and no meat, and the Speck was a bit soggy and had some cartilage in it – easy to remove but still annoying. The ham and the Geselchtes had nothing to complain about, and the pumpkin seed spread was a great diversion from Lower Austria’s Liptauer. And, of course, the great Styrian horseradish has to be mentioned; there was plenty of it, and it was as tear-inducing as I like it.

This was my first Brettljause in Graz, and though I have no doubts that the capital of Styria must have better ones on offer, the Brettljause of Fürstenstand was not as bad as it could have easily been. Go there in summer and book a hotel so that you don’t need to rush back to catch a train back to Vienna, and you may enjoy it even more.