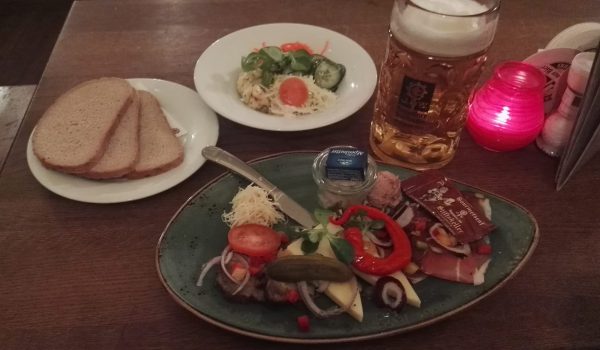 Innsbruck’s historical center is very compact. So compact, in fact, that after the initial couple of hours of getting lost and confused, you understand that no matter where you are, walking for three minutes will inevitably take you to your destination. The interesting thing is, it does not matter which direction you choose: the labyrinthine web of the streets ensures that you always end up where you wanted.

Which made it much more difficult to kill two hours while waiting for a free table at the Stiftskeller. At my first visit at 7 o’clock, the restaurant was full – except a single table where the waiter warned me I would get a neighbor in no time. At 8 o’clock, all the customers I saw at 7 were still there, but much more drunk. Finally, at 9, having given up all the hope, I walked a few steps down to the cellar and found a small room with English-speaking tourists and a small unoccupied table.

Having made myself comfortable and placed the order, I realized I had left my Kindle charging in the hotel. So much for enjoying a nice book while sipping a beer and waiting for a Brettljause. Then, a minute later, my Brettljause and a mixed salad arrived, shortly followed by a beer. Obviously, I eyed the Jausenteller with utmost suspicion – and was not convinced at all.

It did not impress. The three thinly-cut Speck pieces, and the thick slices of cheese and Schweinsbraten (two of each) were buried under the vegetables, and both the mustard and the butter came industrially packaged. The Grammelschmalz in a small jar looked good, though, and there was also some brownish spread on the board, in addition to horseradish.

At the end, everything was quite average. The Grammelschmalz was indeed the best thing: crunchy, tasty, and not too piggy. The spread turned out to be a meaty one, but with a subtle taste of liver, which I didn’t particular like. The Speck was good enough, but not exceptional, and the cheese, after making me happy through a bit of taste, turned out boring once the taste wore off. The Schweinsbraten were fat, very gray and very dead; the taste of pig was not ignorable, no matter how much horseradish or mustard I dropped on them.

Although better that the Goldenes Dachl the day before, Stiftskeller was just another tourist establishment, living on the customers’ numbers rather than quality. Funnily, finding a Brettljause in Innsbruck turned out to be a much more difficult task that I could have ever envisaged. It’s definitely not the capital of Speck I thought it was.