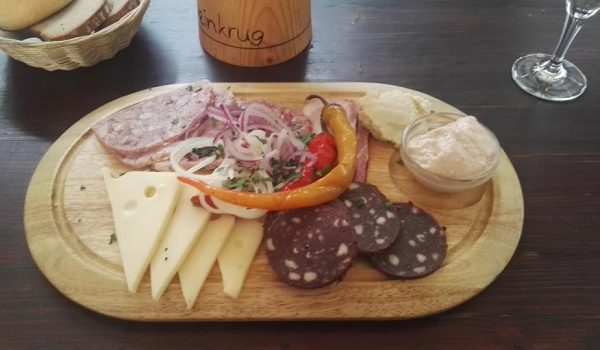 Having read the title and looked at the score, a stupid reader would certainly decide that I was intending to write some sort of a xenophobic anti-Yugoslav post. Nothing could be further from truth. The only two messages I am trying to deliver are 1) Zum Weinkrug is managed by Yugoslavs (or should I say ex-Yugoslavs) and 2) their Brettljause is utter rubbish. Actually, most Yugoslavs are lovely, friendly people, who just decided at one point in their history to start killing each other – the fact that left the rest of the world watch puzzled (apart from a few “most civilized” nations who were applauding). Currently I listen to Djordje Balasevic almost every day (Protina kći is playing as I am writing this), and I am a huge fan. I also quite enjoyed how whatever I asked for at Zum Weinkrug got translated into Serbo-Croatian as the order traveled from the waitress to the manager to the cook (with the ordered mixed salad getting lost somewhere along the way).

The Brettljause did not get translated, but it ended up crap nevertheless. The two of its most prominent ingredients – the Blutwurst (black pudding) and the Sulz (pork jelly) are, as the regular reader knows, some of my most despised, and eating them was a struggle. The thickly cut cheese did not bring much respite by being tasteless and boring, and the two thick slices of Speck were so fat and industrial that having cut off all the fat I understood I did not want to eat the remaining meaty part either.

“Various cuts and various spreads,” the description of the dish in the menu said, and although I can, to some extent, agree to the word “various” as applied to the cuts, when it comes to spreads, I strongly disagree. One of them was just a creamy version of horseradish: good, but not a spread in my definition. The second one looked like a Liptauer, but was extremely watery and garlicky. Actually, it could have been a very acceptable sauce for spare ribs, but as a spread, it was a bad joke.

At the end, eating this Brettljause required a lot of experimentation, like taking really tiny pieces of a roll (the included bread was far too scarce for the amount of meat served), topping them with an insane amount of the garlic spread, dropping as much of the jelly or the blood sausage as possible on top of it, and sending the whole thing in the mouth before the spread could drip on the table or my shirt. Then, before swallowing, adding a few circles of fresh onion to make the taste more interesting.

Well, despite all the creativity, I could not finish this Brettljause, and I doubt anyone can. It’s badly thought over, unbalanced, sloppy and unpleasant to eat. I am sure Djordje Balasevic would agree.