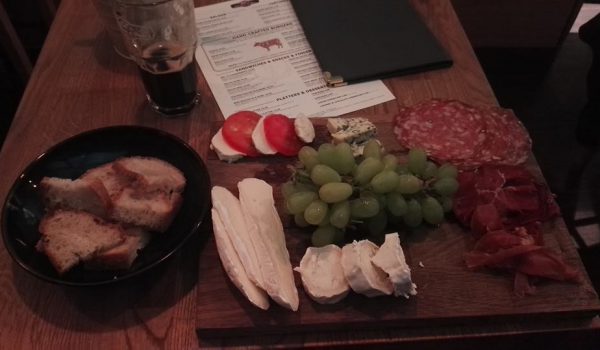 Craft beers are taking over Austria. What started as a rare bottle of a strong Belgian Trappist beer in a bar in central Innsbruck some 12 years ago, extended to a small choice of strangely named beers in selected Viennese restaurants, and culminated in the opening of the Beer Lovers shop, where I must have already spent more money than in all the grocery stores over the past quarter of a century. Finally, someone has recognized that by offering a wide choice of beers one can not only charge a premium price for them, but also attract more customers as a result. It’s not about getting pissed anymore; it’s about being a beer connoisseur.

Mel’s Craft Beers and Diner, which has recently opened in place of an uninviting Irish pub, is basically Beer Lovers with food and service. Even their beer glasses bear the Beer Lovers logo, which points towards some sort of a conspiracy. Whatever it is, having a menu of something like 200 different beers makes the choice interesting and exciting, even though at least 50 of the beers are barely drinkable IPAs and two-thirds of the others contain less alcohol than my piss on a Friday’s night.

The “cheese and meat platter” (named in English, that being the primary language of the customers and the waiters) is a Brettljause with a difference: more cheese than meat plus a whole cluster of grapes. The meat part consisted of thin slices of bresaola and some Italian salami. The cheeses included a bit of tasty Bavarian blue, plenty of quite enjoyable brie, some other rather boring soft cheese cut in round slices and a goat cheese with tomatoes. I am saying “goat cheese” only because their menu mentioned it that way, because it tasted exactly like mozzarella. That is, of nothing.

By itself, the Brettljause was largely a mixed experience, original but unbalanced, and missing half of the ingredients promised in the menu. It also came with a completely inadequate amount of bread, which was not fresh or tasty enough to ask for more. However, neither the Brettljause nor any other food Mel’s serves are actually important. It’s a place to taste interesting beers and a damn good one for that.